Pope Francis addresses the crowd from the window of his apartment at the Vatican on Feb. 9, 2014.
Tiziana Fabi / AFP / Getty Images
By Kharunya Paramaguru

Pope Francis has called the overwhelming hype around his papacy “offensive,” describing himself as a “normal person” like everybody else.

In an interview with Italian daily Corriere della Sera (in Italian), the Holy See expressed his discomfort at the idolization surrounding his leadership of the church, noting that the description of the pope as a kind of superman or star was “offensive.” “The pope is a man who laughs, cries, sleeps calmly and has friends like everyone else. A normal person,” said Francis.

The pope also addressed a question on institutional child abuse. “No one else has done more” to root out and address pedophilia than the church, said Francis, suggesting the Vatican had been unfairly singled out for criticism. Francis also said the church was perhaps the only public institution to have acted with transparency and accountability on the issue. His strong words follow on from last month’s United Nation’s report condemning the Vatican’s handling of priests who have abused children.

Other issues Francis touched on include suggesting women could have a greater decision-making role in the church, addressing the church’s position on birth control and how globalization affects the poor. He also denied suggestions he shared Marxist views. 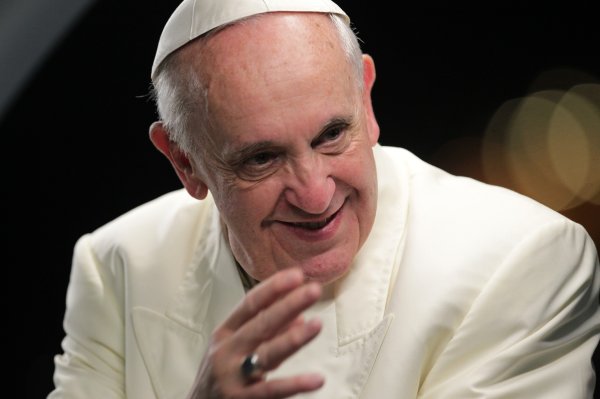 No, Pope Didn't Embrace Gay Marriage
Next Up: Editor's Pick