Harmontown and The Cult of Dan Harmon

It’s been a tumultuous ride for Dan Harmon fans, but things have steadily been looking up. Not only has Harmon returned to helm Community, the show he was sacked from in 2012 — but on March 8 at SXSW, fans will be able to see the premiere of the feature-length documentary about the TV legend called Harmontown.

The trailer for the doc (above) recaps the rollercoaster that has been Harmon’s career over the past several years. Though he was the creator and showrunner of NBC’s Community — a critically adored, hilariously meta comedy with a small but dedicated fan base — Harmon found himself without a job when it was announced that he would no longer be running the show and that Sony, which produces the series, had hired two writers — David Guarascio and Moses Port — to replace him for the comedy’s fourth season.

At the time, Harmon wrote on his Tumblr, “[B]ecause nobody called me, and then started hiring people to run the show, I had my assistant start packing up my office days ago. I’m sorry…. I’m not running Community for season 4. They replaced me. Them’s the facts.” Harmon also added that the people who had canned him — NBC bigwigs — were most definitely not his “friends.” The post was liked and shared more than 13,000 times by the writer’s real friends — his fans.

Newly unemployed, Harmon followed his sacking by taking the live, drunken and freewheeling comedy shows he did while recording his podcast, “Harmontown,” out on the road. The shows became his “avenue in which to vent,” according to the documentary’s teaser. And vent he did, as the trailer vividly shows Harmon mouthing off and drinking heavily on-stage in front of audiences filled with adoring fans.

The trailer makes it pretty clear that Harmon isn’t always the easiest guy to work with. Sarah Silverman appears and tells the camera, “I’m his biggest fan and I fired him.” (Harmon co-created and wrote for her Comedy Central show The Sarah Silverman Program.) His toxic relationship with Chevy Chase made headlines. But despite any professional failures, the trailer also makes clear that Harmon’s fans are the heart of his comedy.

The cult of Dan Harmon — that utterly loyal fan base — is now a well-known phenomenon. When Community was put on hiatus in 2011 to make room for 30 Rock, fans revolted across social media, causing #savecommunity to trend on Twitter; “Occupy NBC” flashmobs were staged outside Rockefeller Center to protest the show’s disappearance.

Yet, devoted as they are, Harmon came by those fans honestly. In a Grantland profile last year, Alex Pappademas explains that Harmon’s work has sincere and exemplary intentions:

And connect he has. The “Harmontown” shows and podcasts intensified that connection, as the trailer shows the writer cavorting on stage in front of packed rooms with people hanging on his every word. “He has given hope to all of us who don’t fit in to normal society,” one woman earnestly explains to the camera; another fan hugs Harmon and looks as if she’s embracing her long-lost friend.

That connection isn’t a one-way street. Harmon’s fans have not only stood behind him and his work, but they’ve also given him respite. Pappademas also notes in his Grantland profile, which was written while Harmon was on his tour, that “if you listen back to the last year or so of ‘Harmontown’ podcasts, one of the things you’ll hear is a fired TV writer taking refuge in the arms of his superfans.”

The Harmontown documentary offers him a chance — to say thank you. 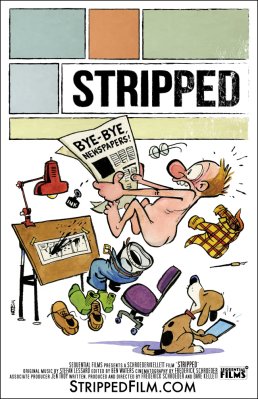