Actress Cate Blanchett accepts the Best Performance by an Actress in a Leading Role award for 'Blue Jasmine' onstage during the Oscars at the Dolby Theatre on March 2, 2014 in Hollywood, California
Kevin Winter—Getty Images
By Michael Musto

At the Oscars on Sunday night, every time a winner thanked their spouse and the camera caught said partner looking a little uncomfortable, I started to feel the same way. Was Cate Blanchett’s writer/director husband Andrew Upton simply exuding bashfulness or was he thinking, “I’m so happy for you, honey. I’m outta here.” Worst is when the spouse doesn’t get thanked at all, as the currently single Hilary Swank eventually found out six years ago.

Having tracked celebrities for years, I know full well the perils of creative-arts coupling. The divorce rate in America has been estimated at 40%, but if surveys were to only concentrate on show business duos, it would surely be closer to 100. Last week, separation came for singer Robin Thicke and actor Paula Patton—former teen sweethearts who married in 2005—as gossip sites wondered if Thicke’s bouncy cooperation with Miley Cyrus’s stage antics threw a dirty wrench into the marriage. On Saturday, Patton looked lovely but ringless at the Independent Spirit Awards, while the next night, Thicke sang a plaintive “Let’s Stay Together” in Atlantic City, publicly working out his issues in a glitzy casino.

The Thickes are not alone in their aloneness. Just a few days later, dating singers Katy Perry and John Mayer also split—after two “on again, off again” years—and if it was because either of them kissed a girl and liked it, they’re not saying.

Whatever the causes were for these breakups, the fact that they were pretty much bound to happen is as elemental as the reality that a hit movie will beget a (lesser) sequel. So many celebrity pairups end in tatters that whenever I hear about a new couple jazzing up the tabloids, my heart breaks for them, knowing that within a few years—or maybe weeks—they’ll be writing bitter songs (and memoirs) about the ex that did them wrong.

The central problem is that members of show business couples are competing in the same field, and their power balance keeps shifting as their careers wildly ebb and flow. In the 1954 film remake A Star is Born, Judy Garland rose to stardom while movie star husband James Mason ended up suicidal as his own career tumbled to the curb. To most people in the know, it felt like a documentary. When more jobs are coming in for one partner than the other, it takes all the selfless love in the world for the unemployed one to swell with unmitigated pride over the other’s good graces. Every time a phone rings in a famous couple’s household, their union becomes potential grist for an awards-show death montage.

Add to this scenario the fact that stars are often apart for long stretches of time—usually with attractive, available people—and the temptation to stray is generally far higher than in a setup between two office workers who don’t have the option of caring about fooling around with extras, dressing room jellybean flavors, or what their best side is.

No wonder so many star couples try to work together as often as possible. (It worked for Woody and Mia—for a while.) Kevin Bacon and Kyra Sedgwick have appeared together in four films, and even sans cameras, they obviously click, having been scandal-free marrieds since 1988. Multiple Oscar nominee Julianne Moore has also been in four of her filmmaker husband Bart Freundlich’s projects, which clearly helps cement their creative and personal bond. Moore is known as a non-phony celeb, one who craves familial grounding to offset the illusory glamour of the biz. She’s been in a relationship with Freundlich since 1996 (they married in 2003), finding a steady co-star in life despite all odds.

Goldie Hawn and Kurt Russell have an even better idea: Don’t get married at all. The movie star duo have stayed together for 30 years, and the fact that they’ve never done the documents, rice, and garter belt routine seems to be a factor in their longevity. Not long ago, Hawn told a talk show host, “Marriage does not necessarily mean that you’re going to stay together, and it really has to do with your will to be together, your devotion, and your ability to listen to each other.”

How inspiring—and rare. Knowing that Hawn and Russell are the exceptions to so many rules should have other stars applauding while running to do what Meryl Streep did: Marry a sculptor.

Michael Musto writes “Musto! The Musical!”–a weekly entertainment column for Out.com. He’s also been published in the New York Times, Daily Beast, and many other publications. His most recent book, Fork on the Left, Knife in the Back, is a collection of some of his feistiest interviews, gossip romps, and observations. 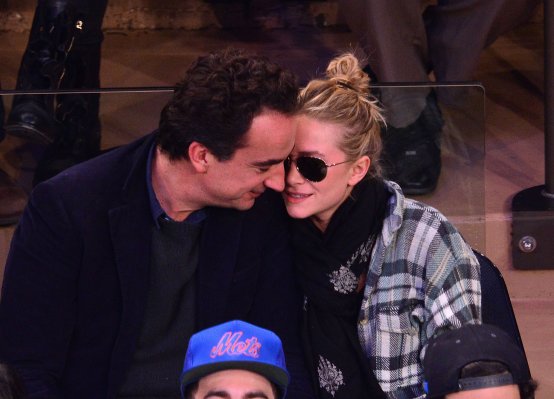 Is Mary-Kate Olsen Engaged? Her New Ring Suggests "Yes"
Next Up: Editor's Pick