7 Ways to Lose An Election

Tuesday marks the official beginning of the midterm elections, as Texas voters head to the polls to cast the first ballots of the 2014 primary campaigns. That milestone also marks the likely end of the country’s strangest campaign: Steve Stockman’s Senate bid.

When Stockman announced he would give up his House seat to challenge John Cornyn, the Senate’s No. 2 Republican, no one was quite sure of his angle. A backbench firebrand, Stockman is known mostly for his outré Twitter account and trollish stunts like walking out of the State of the Union. Few expected him to match the fundraising firepower or organization rigor of Cornyn’s campaign. But Stockman has put on the most baffling display of political ineptitude since Alvin Greene.

The campaign has been so bizarre that Republican consultants in Texas are at a loss to explain it. Mark McKinnon, a former senior adviser to President George W. Bush, suggested recently in an email that it defied rational interpretation, while GOP strategist Matt Mackowiak said the mysterious campaign was “never intended to be anything more than a debt-retirement project.”

Should you ever want to ditch a $174,000-per-year job to self-immolate on the national stage, here is the Stockman campaign blueprint, in seven easy steps:

1. Skip campaigning. Stockman’s website does not list public appearances, of which there haven’t been too many. Groups around the state have complained that he has been a no-show at political events. He had a campaign office condemned for safety violations. “Day to day, just getting hold of him, that’s not Steve, I guess,” said one Tea Party leader.

2. Alienate your base. On paper, an agitator with a 100% conservative voting record had a natural well of support to tap in deep-red Texas. But the Tea Party network that propelled the underdog insurgency of Ted Cruz grew frustrated with Stockman’s antics. “It’s horrible,” a Tea Party leader told Politico, arguing that Stockman’s dishonesty “disqualifies” him from consideration.

3. Go missing. At one point in January, Stockman missed 17 consecutive votes in the House. The media, which had noted his infrequent appearances on the campaign trail, was unable to get a straight answer from staff about his whereabouts. Stockman himself fed the speculation that he’d gone MIA:

In the end, Stockman’s office said he was on a congressional trip abroad, and didn’t understand what the fuss was all about.

4. Fib about the press. Stockman is far from the first politician to court conservatives by making the media a foil. But it is generally a bad idea to claim reporters have lied when there is clear evidence to the contrary.

5. Threaten critics with criminal charges. Stockman filed a libel suit against the Texans for a Conservative Majority, a political-action committee that backs Cornyn, in part for citing a felony charge Stockman appears to have previously admitted. He also issued a veiled threat against media outlets who published the old mugshot.

6. Go dark on fundraising. The congressman, who solicited donations by floating the prospect of impeaching “Barrack [sic] Hussein Obama,” has not filed late-campaign contribution reports to the FEC:

It’s not the first time that Stockman was accused of violating campaign-finance regulations.

7. Claim phony endorsements. As the campaign neared the finish line, Stockman tried to inject some enthusiasm by claiming that the head of a large Tea Party organization endorsed him, according to Breitbart News. The problem? Didn’t happen. A fitting end to a train wreck of a campaign. 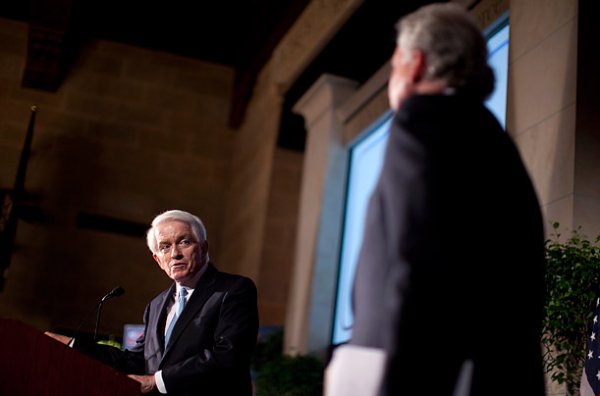