An Ohio principal suspended a fifth-grader for three days last week after he pointed his finger like a gun and pretended to shoot one of his classmates in the head.

The Columbus 10-year old’s pointed finger was called a “level 2 lookalike firearm” in his suspension letter, the Columbus Dispatch reports. Devonshire Alternative Elementary principal Patricia Price has issued numerous warnings about the school’s zero-tolerance policy when it comes to gun play, and sent three home three newsletters reminding parents that any kind of gun play was forbidden at school. “The kids were told, ‘If you don’t stop doing this type of stuff, there would be consequences,’” district spokesman Jeff Warner told the Dispatch. “It’s just been escalating.”

“I was just playing around,” said suspended fifth-grader Nathan Entingh. “People play around like this a lot at my school.”

Nathan’s father said no one felt threatened (the other student didn’t even see Nathan’s gun-finger) and said he thinks school officials are overreacting. “He said he was playing,” Paul Entingh said. “It would even make more sense maybe if he brought a plastic gun that looked like a real gun or something, but it was his finger.” 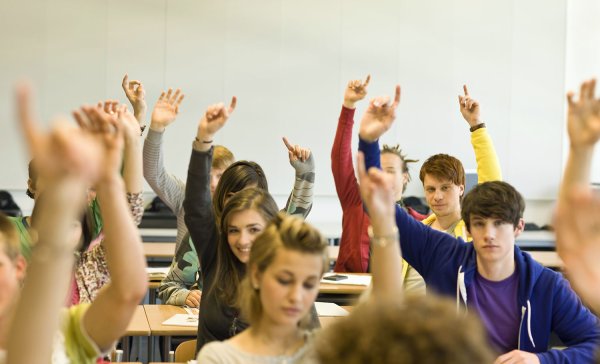 Why Students in Oklahoma Have a Brighter Future
Next Up: Editor's Pick