Frank Zappa performs at the University of Georgia Coliseum on March 15, 1973 in Athens, Georgia.
Tom Hill—WireImage
By Melissa Locker

While The Beatles may have more Grammys, Frank Zappa just got a new strain of acne-causing bacteria named after him.

Researchers at Italy’s Centre for Sustainable Agro-Ecosystems and Bioresources have discovered a form of acne-causing bacteria living in grapevines and elected to call it P Acnes Zappae, in tribute to the experimental rock musician and member of seminal rock band Mothers of Invention, who passed away in 1993, reports USA Today.

Like its namesake, P Acnes Zappae is unique. The strain of bacteria came about from the transfer of human bacteria onto a plant, in this case a grapevine. It’s the first time that a micro-organism has been found to make the jump from people to plants. While the scientists may have named the spot-causing bacteria after Zappa, he is by no means to blame for the zit outbreak happening on your chin right now, as the researchers estimate the adaptation happened around 8,000 to 9,000 years ago, according to their report in the journal Molecular Biology and Evolution.

The scientists credit Zappa for inspiring their outside-the-box thinking that lead to the discovery. They were studying the grapevine’s microbiome —the community of microorganisms that live in the grapevine — and were surprised to find P. acnes, a human pimple-causing bacteria, living peacefully among the grapes. As they tried to figure out how the bacteria had gotten in the grapes, instead of chalking up the bacteria to cross-contamination from humans, the scientists did something “Zappa-style,” and “thought outside the box, worked on it, and found something very, very unexpected.”

“Frank Zappa was a very eccentric musician and somehow very unexpected in his behavior,” said Campisano, speaking to CNN. “We really did not expect this (discovery) and we thought of him.”

Zappa’s widow, Gail Zappa, thinks naming the bacteria after her husband is a great way to honor her husband’s legacy of outside-the-box thinking. “They pursued it, they didn’t just think, ‘This is something that’s irrelevant or unimportant.’ They realized that every piece fits together,” she told USA Today. “For me this is just an extension of Frank’s means of gluing things together, making sense of the universe. It’s strictly conceptual continuity.”

P. Zappae is not the first time that a scientific discovery has been named after the rock legend. A mollusk (Amaurotoma zappa), a new genus of fish, jellyfish, spiders and even an asteroid( 3834 Zappafrank) all bear the Zappa name.

Now, if those Mothers of Invention could put their minds to improving Clearasil.

MORE: LIFE With Rock Stars . . . and Their Parents 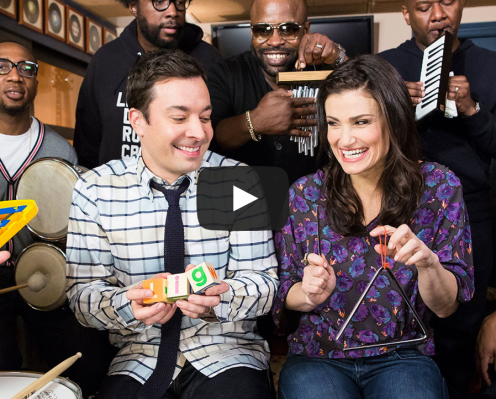 Watch Jimmy Fallon, Idina Menzel and The Roots Sing "Let It Go"
Next Up: Editor's Pick