Egypt’s military chief on Tuesday gave perhaps the strongest indication yet that he plans to run for president in elections set to take place sometime later this year.

Field Marshal Abdul Fattah al-Sisi said he “can’t turn his back” if the majority of Egyptians want him to run for president, the Associated Press reports. During a speech to graduates at the Cairo war college, al-Sisi said, “let the coming days see the official procedures.” He added that Egypt is in the middle of difficult times, requiring unity among the people, the army and security forces.

Al-Sisi’s comments come a week after Egypt’s interim Prime Minister Hazem el-Beblawi announced the resignation of his cabinet, a move that was seen to clear the way for the military leader to declare his candidacy. But Al-Sisi remained in his position as minister of defense in the new cabinet led by former Housing Minister Ibrahim Mahlab, a senior official in the now-dissolved party of Hosni Mubarak, who was ousted by protests during the Arab Spring.

No date has been set for Egypt’s next presidential election, but the contest will be held before voting on a parliament sometime later this year. 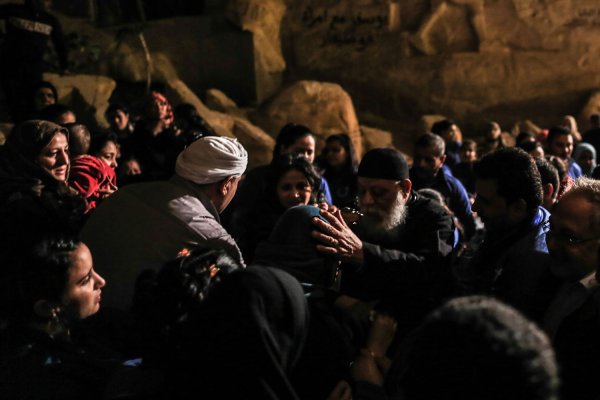 At Weekly Exorcisms, Egypt's Muslims and Christians Unite Against the Demons
Next Up: Editor's Pick