An anticoup protester cries as she pleads with a soldier to leave during a demonstration in Bangkok on May 25, 2014
Sakchai Lalit—AP
By Charlie Campbell

Dozens of prominent Thai activists, academics and commentators have been forced underground to escape the ruling junta, nearly one week after General Prayuth Chan-ocha seized power through a coup d’état.

Many Red Shirts, backers of the now deposed Prime Minister Yingluck Shinawatra, are also believed to have fled to Cambodia, Thailand’s eastern neighbor, in order to evade military raids. There, they have begun procedures to set up a government in exile, although on Monday the Cambodian authorities refused to act as host.

The military already arrested several activists and leading members of the government during last Thursday’s coup. It has since published a list of 35 prominent, mainly Bangkok-based individuals who are required to report to the junta or else face two-year imprisonment. Some have refused with scornful ripostes.

Outside the Thai capital, academics are being phoned individually and told to report to local army bases. Because no regional list has circulated, the numbers who have been detained in the provinces is unknown but thought to be significant. Bookshops are being raided and helicopters routinely buzz universities to intimidate those living and working there, say local residents. In the northern city of Chiang Mai, troops have been openly practicing riot-control tactics at the historic Thapae Gate.

Pakavadi Veerapaspong is a translator in Chiang Mai. Besides rendering works by the likes of Umberto Eco and Milan Kundera into Thai, she also comments on political issues via social media, and organized a panel discussion on the implementation of martial law, which took place two days before the May 22 putsch.

“The discussion went on peacefully, although the army called and threatened to come and arrest us,” she says from a secret location via email. A few days after the coup, all those in attendance were ordered to report to the local barracks.

“Most of us won’t go to meet them, because there is no guarantee of our safety or what the accusations are,” she says, adding that the crackdown is more intense in the nation’s northeast — a Red Shirt stronghold.

“There are no standards of procedure,” she adds. “Some are released and some are detained.”

Many fear charges could be concocted using Thailand’s draconian lèse majesté legislation. Since the junta’s National Council for Peace and Order now has royal approval, any criticism of it can, by extension, be deemed insolent to the revered King Bhumibol Adulyadej. Offenders face up to 15 years in prison. Fearing such sanctions, scores of critics — including many with no particular political affiliation — have sought refuge in the remote highlands of northern Thailand.

Another northern academic has told TIME, on condition of anonymity, that he fled after being contacted by the military on Saturday. “There is no assurance that they just wanted to talk,” he says, “so I decided not to go and report. Hiding was one way to possibly avoid being illegally arrested.”

The crackdown also continues on erstwhile members of the government. Former Education Minister Chaturon Chaisaeng emerged from hiding to courageously condemn the coup Tuesday, and was promptly arrested by soldiers in front of international journalists packed into Bangkok’s Foreign Correspondent’s Club.

“When I said I would not report to the [military] council, I also said that I was not going to escape,” he told the crowd. “I was not going to resist or go underground to mobilize people to resist the military. The coup is an abrogation of democracy and will bring disaster to this country.”

Hundreds continue to mob central Bangkok, staging both pro- and anticoup demonstrations. Incongruously, opponents of the coup have based themselves at an overtly militaristic landmark, the Victory Monument, while 5 km (3 miles) away supporters of the junta hand flowers to soldiers at the Democracy Monument, which commemorates the ending of absolute monarchical rule in 1932.

“We want elections and the right government to control the country,” says humanities student Sutee Wattanakul, 26, at the former protest. “The military should be under the government.”

The military, meanwhile, appears confident enough to reduce the curfew to just the four early morning hours between 12:00 a.m. and 4:00 a.m. It has also begun to pay rice farmers $2.8 billion owed from a calamitous pledging scheme introduced by Yingluck’s government. To many, however, such moves are nothing more than calculated public-relations ploys during a tumultuous time.

“The King’s health is contributing heavily to the military’s decision to move and stage a coup,” says Jakrapob Penkair, a founding Red Shirt, outspoken republican and former government minister now living in exile in Phnom Penh. “The network of aristocrats and imperial people of Thailand are trying to gain control over this uncertain period.” 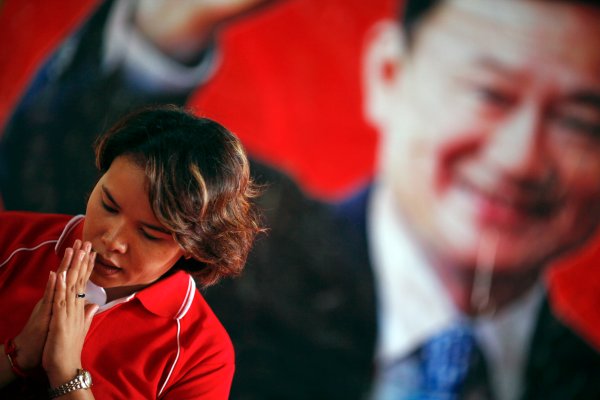