Greenpeace International activists from eight countries scale and occupy Statoil contracted oil rig Transocean Spitsbergen on May 27, 2014 to protest the company's plans to drill the northernmost well in the Norwegian Arctic at the Apollo Prospect of the Barents Sea, close to the Bear Island nature reserve.
Will Rose—Greenpeace/AFP/Getty Images
By Nolan Feeney

More than a dozen activists from eight different countries have occupied an oil rig in the Barents Sea, as part of a Greenpeace protest against a Norwegian company that plans to drill there.

The protestors decided to board the Transocean Spitsbergen rig — in arctic waters roughly 190 miles off of Norway — after Norway’s government reversed a decision to block oil drilling in the area, Mashable reports.

Greenpeace is concerned that an oil spill accident would cause tremendous environmental damage to the surrounding area and the nearby Bear Island nature reserve, and “could reach the nesting place of a million seabirds in less than a week,” said Finnish activist Sini Saarela, quoted on the Greenpeace website.

Norway’s Minister of Climate and the Environment told the Wall Street Journal that drilling does not violate “current policy or regulation.” 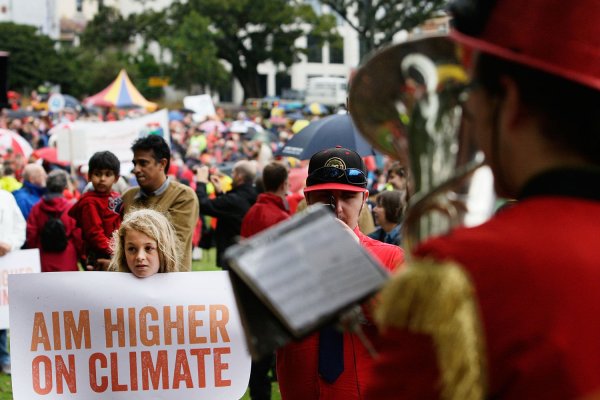 Why 'Global Warming' Is Scarier Than 'Climate Change'
Next Up: Editor's Pick