A security guard stands in front of The Great Hall of the People before the upcoming opening sessions of the National People's Congress (NPC) in Beijing on Mar. 2, 2014
Wang Zhao / AFP / Getty Images
By Michael Schuman / Beijing

China’s leaders get a lot of credit for announcing reforms. In November, economists swooned with praise when a Communist Party plenum unleashed a torrent of reform pledges, promising everything from easing the one-child policy to liberalizing capital flows to opening protected markets. Now, as we head into yet another major leadership confab, the National People’s Congress (NPC), which starts Mar. 5, everyone is waiting to see if President Xi Jinping and his team will offer any signs on how they intend to turn those pledges into real policy. As HSBC economists said in a recent note to investors: “All eyes will be on whether the authorities will walk the walk of reform after the talk.”

Many China watchers remain bullish that real change is afoot. Economist Jun Ma at Deutsche Bank after calling Xi’s announced reforms “unprecedented” in a recent report, went on to comment that “the leadership is fully committed to forcefully implementing these reforms.” The optimists were encouraged by a February meeting of the Central Leading Group for Overall Reform, formed to oversee the economic policy agenda, where Xi emphasized that “the starting of a race decides the second half of the race, and implementation is the key.” A report from BofA-Merrill Lynch listed out a long series of policies the investment bank expected to be discussed at the NPC, including steps to help local governments handle their excessive debt burden, expand more private ownership of state enterprises and strengthen the feeble pension system.

Yet at the same time, there is a widespread feeling that China’s leaders are doing a lot more talking about reform than reforming. Initiatives are being rolled out at a glacial pace; some important experiments, in financial liberalization for instance, are being confined only to a free-trade zone in Shanghai. Though the overall reform plan at last November plenum was bolder than many had expected, it was, at the same time, an outgrowth of the direction China has been following for years. Some of the proposed changes were long overdue (loosening the one-child policy) or have been repeated again and again (freeing up the currency) or were just plain vague (handing the private sector more power). Timetables were nowhere to be found.

Beijing has good reasons to go slow. There are dangers in pressing forward too rapidly. Throwing open the unprepared financial sector to the world too quickly would be potentially destabilizing. The history of China’s reform process shows that the leadership usually moves in baby steps and mini-experiments, which eventually add up over time to major change. What China has to do is not simple: Shift the world’s second-largest economy from a state-controlled, investment-led growth model to a private-led, consumption-heavy model. It can’t and won’t happen overnight.

My argument, though, is that China is just not making enough progress. The steps being taken are tweaking the existing economic system, not altering it in the fundamental ways that have become necessary. State-owned enterprises, bloated and inefficient, won’t become stronger as long as the government coddles, subsidizes and protects them from competition, for instance. The banks won’t allocate money more wisely – away from state-linked firms and projects and towards the more productive private sector – as long as the financial sector remains wrapped in government controls. But the reforms that would address these issues are crawling along. Despite expectations of change, interest rates are still highly regulated in ways that punish savers and favor investment. Since capital isn’t priced properly, consumption suffers while debt escalates. The longer these problems are allowed to fester, the more new problems will arise. That’s what happened with China’s shaky “shadow banking” sector, seen by many as a potential risk to the nation’s economic stability. Credit from trusts and other forms of alternative lending have exploded because companies and investors are trying to circumvent the overly fettered formal banking sector.

Caution is necessary but promises alone won’t ensure China’s growth miracle continues. Many economists expect China’s economy to continue to slow down this year as its current growth model sputters. I’d like to see China’s leaders start reshaping the structure of the economy in ways that will unleash its future potential, instead of just promising to do so. Baby steps are fine, but eventually the baby has to learn to walk on its own. 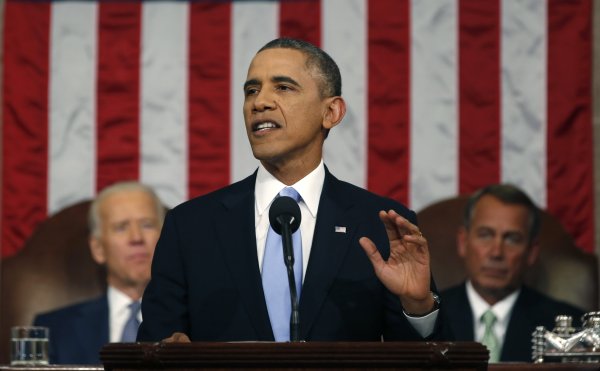 5 Years After Stimulus, Obama Says It Worked
Next Up: Editor's Pick