This MMA Fighter Is Asian, Female and Muslim

Ann Osman of Malaysia poses on the scale during the official weigh-in for her bout against Sherilyn Lim of Singapore ahead of the One Fighting Championship bout at Chijmes on Oct. 17, 2013 in Singapore
Suhaimi Abdullah / Getty Images
By David Stout

In the first round of her professional mixed martial arts (MMA) debut, Malaysia’s Ann Osman took close to 30 knees to the mid-section from her opponent, Singapore’s Sherilyn Lim.

“You’ve broken her!” Lim’s trainer could be heard shouting, as Lim leaned against the cage of the Singapore Indoor Stadium.

In the second and third rounds, Osman took more devastating knee and head strikes, but responded with knees of her own along with takedowns and crushing ground and pound. Both fighters were unloading whopping lefts and straight rights as the final bell rang. But after 15 minutes of brawling, Lim’s hand was raised in a split decision victory.

ONE Fight Championship’s Total Domination event, held last October, was a disappointment for Osman, but “I definitely gave my best during the fight,” the Malaysian tells TIME.

And despite her defeat, the bout captured the public’s imagination. On Mar. 14, following immense pressure from both fans and media, ONE FC, the largest MMA promotion in Asia, will host a rematch between Lim and Osman — only this time in Osman’s home country.

The fight, which will be broadcast in 28 different countries, will contain several firsts. This will be Osman’s first fight in front of her fellow Malaysians, and it will be the first time a female Muslim fighter has competed on the global stage in a country where the official religion is Islam.

“There’s an empowering element to women in Asia to see a strong, confident, fit female competing on a world scale, on a world stage, especially if you’re Muslim or if you’re from a Muslim country like Malaysia,” says ONE FC CEO Victor Cui.

Not many sports give women similar prestige as their male counterparts, but the growing prominence of female UFC stars such as Ronda Rousey, Liz Carmouche and Misha Tate has almost given MMA that distinction. And with the meteoric rise of MMA in Asia, ever more women are taking up the sport, and breaking fresh ground as they do.

“Having a female fight in a Muslim country like Malaysia is going to be a first,” says Cui. “There’s a huge cultural implication.”

Malaysia may not be Saudi Arabia or Iran, but religious conservatism is increasingly prevalent there. In October, the country’s courts ruled that only Muslims have the legal right to use the word ‘Allah,’ sparking fierce protests from the nation’s Christian minority, who have longed used the same word for God.

Nevertheless, Osman, 27, says she’s has never felt ostracized because of her gender or decision to push boundaries. “I’m fortunate to not have felt any of that pressure about me being Muslim and a female MMA fighter at the same time,” says the Sabah native. “I’m very fortunate to have the support from everyone I know.”

According to Malaysian MMA pioneer Melvin Yeoh, Osman’s acceptance comes from both ONE FC’s assertive marketing in tandem with MMA’s official recognition by the Ministry of Youth and Sport, one of three such sports to have the state’s blessing.

“She’s a Muslim and people saw what she can do and then they thought, this we can also do,” says Yeoh.

While only 10 or so women trained at Yeoh’s fighting camp in Johor Bahru throughout 2013, in the wake of Osman’s October bout, and the hype surrounding the upcoming rematch builds, interest in MMA from female athletes has snowballed. In January alone, he has seen more than 20 women sign up.

According to Cui, it’s emphasizing narratives like Osman’s and playing off historical geopolitical rivalries like the one that exists between Singapore and Malaysia that is essential to MMA sinking deep roots into emerging Asian markets. “It’s Malaysia versus Singapore and those guys have a very, very extremely heated competition,” he says.

When ONE FC started investing in Malaysia in earnest two years ago there were only a handful of MMA gyms. Fast-forward to 2014 and there are now more than 30 operating in the capital Kuala Lumpur. This only adds to the competition between the nations. Singapore currently has around 10 fighting gyms.

But its not just regional rivalry that is stoking anticipation, as these women can actually fight. MMA blog Bloody Elbow nominated the third round of their previous encounter for the site’s “Round of the Year” for 2013.

For Osman, though, there’s only one prize in her sights. “I am definitely taking home the win in front of my hometown crowd,” she says. “First round knockout!” 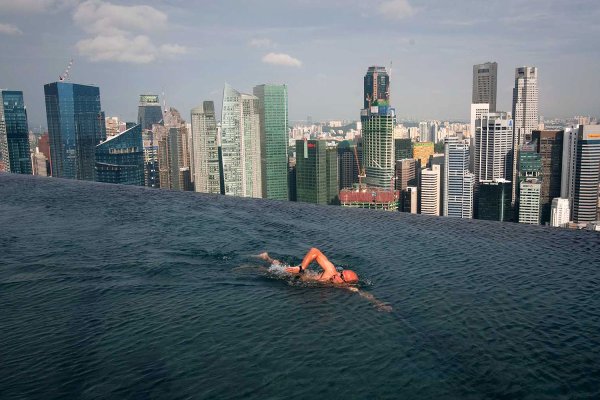 Move Over Tokyo, the Most Expensive City is...
Next Up: Editor's Pick