Indonesian migrant workers, from left, Khasmira and Mimi protest the alleged abuse of Erwiana Sulistyaningsih in Hong Kong on Jan. 19, 2014
Per Liljas
By Per Liljas

Sundays are the days that Hong Kong’s domestic workers become most visible, as they leave their employers’ apartments to gather together in their thousands on overpasses and sidewalks, enjoying a day off. On Jan. 19, however, the normally jovial atmosphere was made more somber as around 2,000 domestic workers demonstrated for better conditions and legal safeguards.

“We are workers, we are not slaves,” they chanted, wearing headbands that read “Justice for Erwiana.”

The case of Erwiana Sulistyaningsih — an Indonesian maid allegedly abused by her Hong Kong employer — came to light more than a week ago and has shocked many with its brutality. The employer was arrested Monday attempting to flee the city.

Many of Erwiana’s peers are now calling for better legal safeguards like scrapping a law that requires maids to live with their employers — a requirement seen as making domestic workers vulnerable to overwork as well as sexual and physical abuse.

Indonesian domestic workers would also like to see the ending of a recruitment system that requires them — unlike their Filipina counterparts — to find employment only through an agency. That system, they say, exposes them to unscrupulous middlemen who levy exorbitant charges and insist that maids stay with abusive employers until the women have worked off their debts.

Sunday’s march was organized by an alliance of advocates for migrant workers’ rights, who have since launched the initiative HK Helpers Campaign. Khasmira, a 32-year-old domestic worker on the march, says Erwiana’s case has unsettled her. “It’s scary, because next time it could be one of us,” she says.

Local residents also took part in the demonstration. “I’m here to show my solidarity, support and outrage,” said 29-year-old Hongkonger Billy Leung as the protest reached the city’s main government offices. “I grew up with a domestic helper doing the cooking and taking me to school, we had a close connection. I’m shocked and sad to see what happened to Erwiana, but it’s only the tip of the iceberg.”

Erwiana has declared that she will take legal action against her former employer. Rights lawyer Robert Tibbo, who advised National Security Agency whistle-blower Edward Snowden when he briefly holed up in town after fleeing the U.S., believes Erwiana also has grounds for suing the government for failing to provide her with proper protection.

“There is enough evidence out there to show that helpers are in a vulnerable position and that there is ongoing abuse,” Tibbo tells TIME. “The most telling and shocking issue is that Erwiana went through the immigrations channel at the airport without being properly asked what had happened to her. It was quite clear that she had been tortured, in which case government staff have a duty to assist her.”

Matthew Cheung Kin-chung, the Secretary for Labor and Welfare, says that the Hong Kong government is very concerned about Erwiana’s case, and that two police officers have been sent to Indonesia on Monday to interview her.

Although it is more extreme than most, the past few days have shown that Erwiana’s case is far from isolated. Two more maids have testified of similar abuse at the hands of the very same employer, the latest allegations presented in a front-page story in the local newspaper the Standard on Monday.

Commentators and netizens in Indonesia have lamented the plight of workers abroad and called for action. “Future employers of Indonesian migrant workers have to be psychologically tested first,” said one Twitter user:

In an op-ed for Kompasiana.com, Iwan Piliang called female Indonesian migrant workers “foreign-exchange sacrificial lambs,” referring to the $7.4 billion in remittances they sent home in 2013. The money is tempting. A shop assistant can earn many times her salary by working as a maid in Hong Kong, where almost a third of the 512,000 Indonesians working overseas are found. So long as that is the case, the risk of abuse will continue. 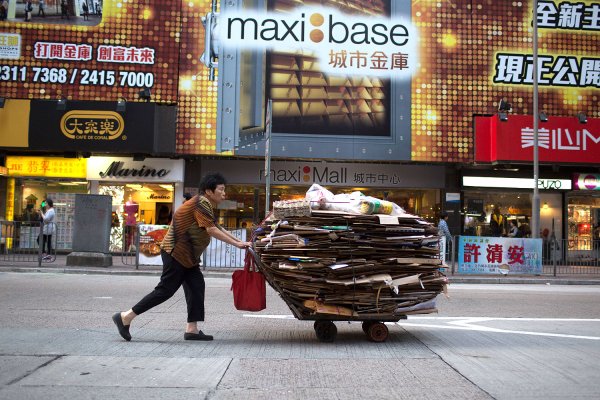 Hong Kong's Twist on Welfare: The More You Work, the More Welfare You Get
Next Up: Editor's Pick