Thai police officers examine the scene of an explosion at an antigovernment protest site in Bangkok on Jan. 19, 2014
Ed Wray / Getty Images
By Charlie Campbell

Thailand’s antigovernment protests have become marred with bloodshed with one killed and 67 wounded over the past three days.

At Bangkok’s Victory Monument, one of several demonstration sites occupied by opponents of Prime Minister Yingluck Shinawatra since Jan. 13, two explosions injured 28 people on Sunday. One person had already died from wounds sustained when a grenade was hurled at protest leader Suthep Thaugsuban on Friday.

“We have made it clear that we will fight peacefully,” Suthep, a former lawmaker for the opposition Democracy Party, told gathered supporters late Sunday. “But they do [violence] to us every day.” The 64-year-old urged his supporters to start besieging provincial government offices around the country from Monday.

In total, nine people have been killed and more than 500 injured since protests began in November.

Protesters accused Yingluck, Thailand’s first female Prime Minister, of being a puppet of her notorious brother, former Premier Thaksin Shinawatra, a divisive figure who was ousted in a military putsch in 2006 and remains in exile in Dubai following a corruption conviction.

(MORE: The Nightmare Gets Worse for Embattled Thai PM Yingluck)

Thaksin is feted by rural voters in Thailand’s populous rice-farming northeast, but reviled by royalists and the entrenched elites of Bangkok and southern provinces. The current unrest began with a now shelved amnesty bill that would have allowed Thaksin to return home as a free man.

Tens of thousands have taken to the streets of Bangkok since last Monday to shut down the sprawling capital; rock bands, zealous orators, market stalls and food hawkers set up camp in key intersections of the city, blocking traffic. While numbers have dwindled in recent days, a hard core of protesters remain intent on making the country ungovernable by surrounding government institutions, forcing civil servants to work from home or temporary offices.

Seeking to quell the discontent, Yingluck has called snap elections for Feb. 2, but the Democrat Party has boycotted the polls, while opposition supporters have disrupted candidate registration in their southern strongholds. Protesters know that Thaksin-backed parties have won all five polls since 2001 with significant majorities and so Yingluck’s Pheu Thai Party is likely to remain in power. Instead of new elections, they want a people’s council to enact reforms that would purge Thailand of Thaksin’s influence.

Observers believe the upsurge in violence may be an attempt to provoke an intervention by the powerful armed forces. Thailand has seen 18 actual or attempted military coups since the end of absolute monarchy in 1932. “I feel very sorry about the violence and don’t want to see this this happen,” says Thida Thavornseth, chairwoman of the United Front for Democracy Against Dictatorship (UDD), the principal organization of Thaksin supporters or Red Shirts. “Maybe somebody wants to see a coup to stop everything and get power.”

So far, army chief General Prayuth Chan-ocha has refused to take sides, but also refused to rule out the possibility of assuming control if violence proliferates. “I don’t know what that solution is, but we soldiers will do our best to ensure safety for the people,” he said earlier this month.

A military coup would certainly see a response from the Red Shirts. “We need to watch the situation as things change day by day,” says Thida. “We will do everything we can to oppose a coup, but peacefully without violence.” However, reports have already emerged of Red Shirt radicals stockpiling weapons; and considering the UDD has a support base of around 10 million, Thida warns that a minority will always take things too far. “Maybe we have some very small groups — maybe two or three or five — that think differently and will try to do something [violent].”

MORE: Thai Opposition Digs In for a Long Protest 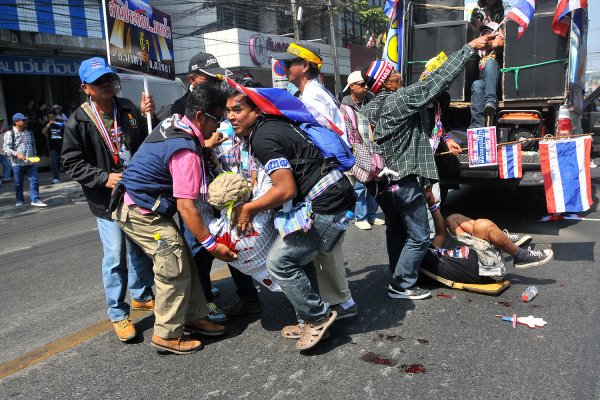 The Nightmare Gets Worse For Embattled Thai PM Yingluck
Next Up: Editor's Pick