Why Pope Francis May Be the Best Politician in the World

Pope Francis arrived in Bethlehem's Manger Square in an open vehicle where over 10,000 Christian pilgrims were packed on May 25, 2014 in the West Bank.
Heidi Levine—SIPA
By Christopher J. Hale

It’s hard to argue that Pope Francis is not the world’s best politician after his trip this past weekend to the Holy Land. In fifty-five hours, the 77-year-old Bishop of Rome visited three countries, gave fifteen addresses, planted two trees and held a groundbreaking 45-minute press conference. With a weekend full of blockbuster moments, it might be a bit audacious to say one stood out above the rest. But if there is one that will have a lasting impact on the region, it was Pope Francis’s Sunday surprise.

While celebrating an open-air Mass in Bethlehem, Francis unexpectedly invited Israeli President Shimon Peres and Palestinian President Mahmoud Abbas to the Vatican for a June meeting of prayer and dialogue. Within an hour, both had accepted.

Francis’s successful overture was especially remarkable considering the failed efforts by the United States earlier this spring to get both sides to the table to begin negotiated peace talks. However, this could be the boost that Secretary of State John Kerry needed to revive this peace process, which has been largely dormant for the past four years.

But almost immediately, commentators have tried to downplay the meeting. Daniel Levy told The New York Times that the meeting would “mean nothing in big-picture terms.” David Horovitz, the editor of the Times of Israel, added that “[i]t would be naïve to think the sight of Peres, Abbas and the pope doing anything together is going to change the world.” He did acknowledge, however, that the meeting would help the “effort to foster a different mind-set among Israelis and Palestinians.”

But to reduce June’s meeting to an act of mere symbolism fails to understand the role religion can and should play in addressing difficult political and ethnic issues. Throughout world history, religious prophets have creatively navigated tense situations to advance peace and justice. Within the past century, Gandhi, Martin Luther King and St. John Paul II showed us that religious witness can win a war without raising a hand.

Even as recently as last September, Pope Francis and the Catholic Church flexed their spiritual muscles in the wake of possible American military intervention in Syria. When an invasion seemed imminent, Francis called on the Church to have a global day of prayer and fasting. During a vigil held in St. Peter’s Square, Francis asked: “[i]s it possible to change direction? Can we get out of this spiral of sorrow and death? Can we learn once again to walk and live in the ways of peace?”

Critics argued then that the Church’s response of fasting and prayer would do nothing to alter the situation in Syria. But they were wrong. The international community negotiated a disarmament plan for Syria’s chemical weapons, and the United States was able to avoid a third significant overseas military campaign in twelve years.

Did prayer really makes the difference? It’s hard to say. Violence still engulfs Syria, and the progress towards peace is difficult. But time and again when political actors fail to make progress on society’s most contentious issues, religion has made all the difference.

If Pope Francis’s prayer meeting is the initial catalyst to restart the Middle East peace talks and we can somehow end the perpetual violence that plagues the region, then we will know the angel Gabriel was right: “nothing is impossible with God.” 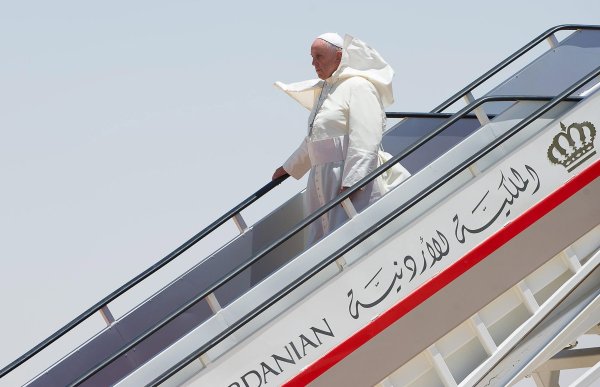 Pope Francis Takes on 'Daddy's Boys'
Next Up: Editor's Pick