Why Obama Is Leaving 10,000 Troops in Afghanistan

By choosing to leave almost 10,000 troops in Afghanistan after the formal end of American combat operations later this year, President Barack Obama made a choice between two imperatives.

One was to make a clean break with a war that has lasted more than 12 years, costing hundreds of billions of dollars and thousands of American lives, with inconclusive results. Obama was happy to take that path in Iraq, from which he pulled out the last U.S. soldier in December 2011. (There’s some dispute as to whether Obama preferred to leave a small residual force but was denied by the Iraqi government; suffice to say Obama wasn’t hell-bent on staying.)

The other imperative was to ensure that Afghanistan doesn’t become like a horror movie killer who springs up the moment the you think he’s dead and turn your back. Afghanistan’s security forces probably aren’t yet ready to defend their government against the Taliban, a weakened but hardly defeated enemy. A residual American force can aid the Afghans with everything from intelligence to logistics to medical assistance. (The Afghans have paltry Medevac capabilities, for instance—hardly a morale booster for their troops.) Obama may rightfully doubt that maintaining tens of thousands of U.S. forces can remake Afghanistan into a tidy success story. But neither does he want to preside over a slide back into a 1990s-style civil war.

That civil war, of course, produced a Taliban government which harbored al-Qaeda and made the Sept, 11, 2001 terror attacks possible—the reason we invaded Afghanistan in the first place. Obama never promised to make Afghanistan a functioning democracy, or even to defeat the Taliban. His repeated vow has been to “disrupt, dismantle and defeat al-Qaeda” in the region and prevent the terror group’s ability to threaten the U.S. and its allies. A residual U.S. force in Afghanistan will be crucial to achieving that goal.

Even with most al-Qaeda figures killed or driven from the country, a senior U.S. official told TIME in December, “it’s likely there would be some residual al-Qaeda or or related affiliates that persist beyond [the end of 2014]. And we would retain the requirement to disrupt any threats. The preferred way for us to do that is in a partnership with the Afghans.”

Americans are much more able to conduct counterterrorism operations than the Afghan security forces. Perhaps just as important, the residual U.S. troops will be right across the border from Pakistan’s notorious tribal areas, where the most dangerous al-Qaeda-affiliated operatives are still based. Since the U.S. has no military presence in Pakistan, the ability to continue drone missions from Afghanistan will be enormously valuable.

A continued U.S. presence will also have symbolic and diplomatic value, as the former U.S. ambassador to Kabul, Ryan Crocker, told TIME in February. At a moment when there was talk of a residual force numbering in the very low thousands—or even none at all, given that Afghan President Hamid Karzai refused to sign a post-2014 military agreement with the U.S. (his successor is expected to do so)—Crocker said a robust American force was a valuable way of “signaling to friends and foes alike that we’re in this for the long run” in a region that America has abandoned before.

But wait: Obama is also announcing that all U.S. troops will leave Afghanistan by the end of 2016. That would seem to undermine the message of support and engagement—and risk allowing al-Qaeda and the Taliban to bide their time for just a bit longer, right?

Possibly. But it’s also possible that that America’s troop presence could be extended by a future agreement in the final days of Obama’s term, especially if the Afghan government feels vulnerable and Washington sees signs of a local al-Qaeda resurgence.

An Iraq-style clean break from Afghanistan may be tempting. But recent history suggests it’s risky. 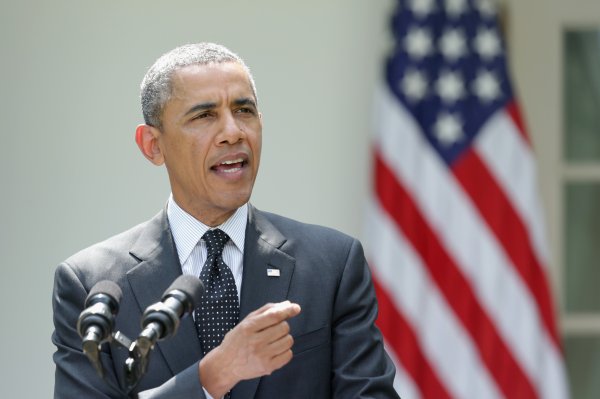 Obama Says 'Time to Turn The Page' on Afghanistan War
Next Up: Editor's Pick