How Often Does Your College Report Sexual Assaults?

The prevalence of sexual assault on college campuses is often masked by low levels of reporting, as Eliza Gray reported in a recent TIME cover story. Despite the troubles with reporting, comparing the number of incidents that are recorded on campuses can be instructive. In the interactive below, you can search for your school to see how many sexual assaults it reported between 2006 and 2012.

Counterintuitive though it may seem, a higher number of reports from an institution is often a good sign, because it means the school is doing a better job than others at addressing the issue. According to research from the Department of Health and Human Services [pdf], nearly one in five women is the victim of sexual assault or an attempted assault while attending college. Reporting levels for all schools are well below that number. 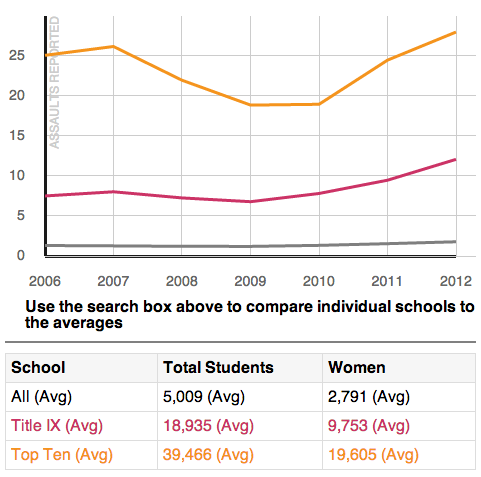 All schools that receive federal funding must submit annual security reports to the Department of Education, and the White House recently pressured universities to address the problem more proactively.

Here are the top-ten schools with the highest cumulative reports of sexual assault from 2006 to 2012. Again, high reports don’t necessarily mean the highest levels of the crime.

In Memoriam: Celebrating The Life of Poet Maya Angelou
Next Up: Editor's Pick