U.S. President Barack Obama and Major General Jeffrey Buchanan participate in a wreath laying ceremony at the Tomb of the Unknown Soldier at Arlington National Cemetery in Arlington, Va. on May 26, 2014.
Drew Angerer—EPA
By Noah Rayman

Obama, who returned hours earlier from a surprise visit to troops in Afghanistan, pledged again to end the war there by the end of the year and called for better support for America’s veterans, a nod to the recent troubles that have plagued the Department of Veterans Affairs. Veterans Affairs Secretary Eric Shinseki, who has faced calls to resign since it emerged that VA medical facilities had reportedly falsified records to cover up long waits for care, was in attendance.

“We must do more to keep faith with our veterans and their families,” the President said. Those who had fought for their country, he added, must “get the care and benefits they’ve earned and deserve.”

Obama stopped short of directly addressing the issue, but in an interview airing Monday afternoon with CNN, Defense Secretary Chuck Hagel said the idea of veterans on secret waiting lists being denied care “makes me sick to my stomach.”

“Because it is a clear responsibility we have as a country, as a people, to take care of these men and women and their families who sacrificed so much,” said Hagel, who still backs Shinseki. “Let’s see what happened, why it happened, how it happened. Then we’ve got to fix it.”

At Arlington National Cemetery on Monday, Obama also repeated his statement made in Afghanistan on Sunday that the U.S. was at a “pivotal moment” in Afghanistan, reiterating his pledge to pull out most troops by the end of the year.

“By the end of this year, our war in Afghanistan will finally come to an end,” he said.

Obama spoke at Arlington on its 150th anniversary, and harked back to its creation amid the Civil War.

“We declared upon this hill a final resting place for those willing to lay down their lives for the country they loved,” he said. 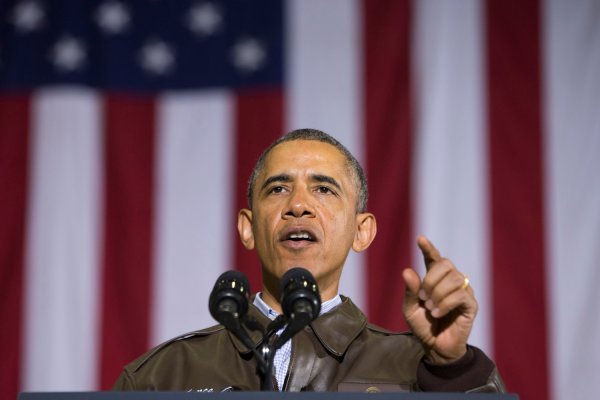