Jeff Bezos is once again using ruthlessly self-serving tactics to pressure book publishers into lowering prices. In an attempt to force Hachette to lower its wholesale price of e-books, Bezos has started delaying delivery of some hard- and soft-cover Hachette books and raising prices on others.

Good for him. This is vintage Jeff Bezos: controlling, ruthless, vicious — and probably right.

Will his move further weaken book publishers, which are already operating under whisper-slim margins and are looking to e-books to save them? As the author of three books myself, all published by mainstream publishers, I worry about that myself.

But I very much doubt that will be the outcome. The ultimate winner of this battle will be buyers and readers of books. If Bezos wins this battle, I would bet that publishers and book authors may just come out ahead as well. And, yes, Amazon most certainly will, too.

The battle boils down to this: What is the optimal price for e-books? If it’s too high, fewer will be sold. Too low, profit margins will narrow even further. Bezos, head of the world’s biggest book retailer, thinks he has a better view than book publishers of what e-books should cost. He’s probably right.

Wall Street analysts have speculated that Bezos is trying to get publishers to lower the wholesale price of e-books because he wants to raise Amazon’s profit margins. Those margins are very tight right now. Earnings per share are currently $0.23, compared to $0.51 on Dec. 31, 2013.

I’m betting this speculation is wrong. Bezos’s tactic is more likely a ploy to reduce retail prices of e-books, not to increase Amazon’s profit margins.

Bezos, for all his many flaws, is one of the best business executives in the world — possibly the best. There is one outstanding attribute that makes him so: Bezos has always put his customers at the top of his priority list.

Unlike almost every other CEO of a publicly-traded company, Bezos does not consider his most important constituency to be shareholders, followed by the board of directors. Bezos knows that if customers are happy, everything else tends to fall into line in the long run.

Amazon’s margins have been tight or nonexistent before. It lost $0.60 per share in September 2012, and Bezos did not panic. In the last five days, since news of Bezos’s hardball tactics emerged, the stock price has increased about five percent (although that’s probably because shareholders mistakenly think this is a ploy to increase profit margins).

The brilliance of Bezos’s slim-margin strategy is that it’s better for everyone. He invests money back into the company, giving it a stronger future and expanding markets. Even shareholders have become used to it. When most companies report a loss or tiny profits, shareholders rebel and sell the stock. That can make it difficult for the company to raise money when needed by selling more stock. Indeed, Amazon’s stock price has dropped nearly 22 percent since the beginning of the year.

But the smart investors in Amazon are patient, possibly the most patient in the world. It’s too bad other CEOs don’t follow that strategy. Google has a similar strategy. Both companies can get away with low profit margins only because the founders hold a high percentage of voting stock and can’t be fired for taking risks. They cannot be fired for being too smart (although it’s hard to fire them for being too stupid as well).

The one time Bezos worked frantically to increase profitability was when the stock market crashed in 2000. Amazon had never made a profit up until then, and many other unprofitable dot-com companies were going broke and out of business. Bezos had to show that he could run a profitable company, so he fired people, cut out unprofitable businesses, and made Amazon profitable. He proved his point.

Bezos doesn’t ignore profit margins, he just takes them out of the hides of everyone except customers. He pays terrible wages, especially to low-end employees, strong-arms suppliers and business partners to lower prices, and invests in technologies and tactics that will reduce costs, often by firing more people. These are the tactics of a ruthless strategist.

I would never want to work at Amazon. But I have to admit I like buying from the company.

I don’t know if this tactic will get Amazon in trouble with antitrust regulators around the world. Estimates have said that Amazon controls about one-third of the paper book market and nearly twice that share of the e-book market. That certainly gives him enough clout to pressure suppliers when other retailers cannot.

Usually, however, monopolies are are attacked because they use their power to increase prices, not cut them. If Bezos simply uses a lower wholesale e-book price to increase profit margins, that could cause trouble with regulators. If he instead reduces e-book prices even more, there is little chance of government retaliation.

There may, in fact, be plenty of room to reduce e-book prices. E-books provide publishers with the highest profit margins of any type of book. A June 2013 report by Harper Collins showed that, although e-books were priced at slightly more than half that of hardcover books, the company itself collected 70 percent of the e-book price and just 49 percent of the hardcover price. E-books accounted for 75 percent of the publisher’s profits, compared to 41.4 percent for hardcover books. Further, e-books keep increasing their market share of all books published.

Lower prices are more likely to increase sales of e-books. Since there are no paper, printing or shipping costs for e-books, that would translate into almost pure profit increases, for Amazon, publishers, and authors.

If his tactics hurt the e-book market, Jeff Bezos will certainly back off. He’s too smart to destroy an industry that he relies upon so heavily. My biggest fear is that he will simply take over more and more of the e-book publishing businesses himself and bypass traditional publishers. That would certainly hurt everyone (including me).

What Bezos is doing, however, is trying to give increased momentum to e-books, where he clearly sees his future as a book retailer and publisher. If traditional publishers are smart enough to capitalize on that trend as well, everyone will come out ahead.

Richard L. Brandt is the author of several books including The Google Guys: Inside the Brilliant Minds of Larry Page and Sergey Brin and Capital Instincts: Life as an Entrepreneur, Financier and Athlete. His most recent book is One Click: Jeff Bezos and the Rise of Amazon.com. 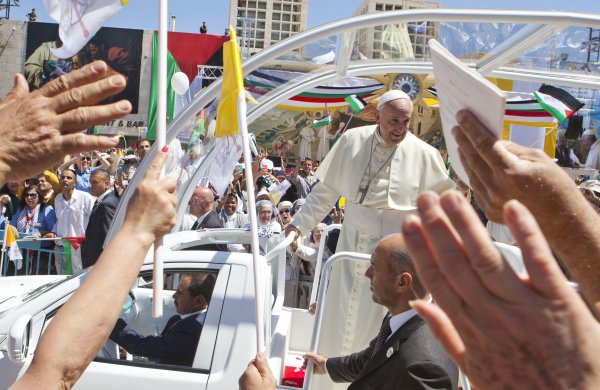 Why Pope Francis May Be the Best Politician in the World
Next Up: Editor's Pick