Oscars 2014 Recap: '12 Years a Slave' Is King, and Lupita Nyong'o the Princess Bride

“It doesn’t escape me for one moment that so much joy in my life is thanks to so much pain in someone else’s,” said Lupita Nyong’o, accepting the Academy Award for Best Supporting Actress in 12 Years a Slave. She paid tribute to Patsey, the doomed, winsome slave she played, and to her director, Steve McQueen, “for putting me in this position. This has been the joy of my life.”

Tears of joy overwhelmed Nyong’o for a second, but she pressed on, emotion not impeding but rather, stoking her eloquence. “I’m certain that the dead [slaves] are standing about you and watching, and they are grateful, and so am I.” She glanced at the award and added, “When I look down at this golden statue, may it remind me and every little child that, no matter where you’re from, your dreams are valid.” As she strode off stage to cheers from the Hollywood swells who, six months ago, didn’t know her name — let alone how to pronounce it — she cradled the Oscar like her own newborn.

Among the major awards show, the Academy bash is at a disadvantage. On the Grammy and Tony programs, performers sing the number that got them nominated. The Emmys are at least consistent: TV stars get prizes on TV, and the TV audience watches. But the Oscar winners, the famous ones, are actors who strain for one night to play the public version of themselves — unless a ray of genuine emotion fills this cathedral of self-congratulation, as with Nyong’o’s two minutes in the spotlight. Radiant in her ice-blue Prada gown, with a headband as a talisman of her Kenyan home, she gave testimony that was both nakedly honest and some kind of great acting. No wonder she won. Primed by her work in 12 Years a Slave, the voters wanted to see her give another passionate performance, and she rewarded their faith.

Good thing, too, for the 86th Academy Awards, which was hosted by Ellen DeGeneres and lasted three-and-a-half hours — or, and just try comprehending this, longer than The Wolf of Wall Street — was a glam but tame affair. Its winners held few surprises for the cognoscenti (i.e., the readers of our Oscar predictions package last week).

(READ: Why Gravity was never going to win Best Picture)
Slave, Gravity, Dallas and Frozen accounted for 15 of the 21 feature-film awards; the others winners, besides Blue Jasmine, were Her for Original Screenplay, The Great Gatsby for Production Design and Costumes, The Great Beauty for Foreign Language Feature and Twenty Feet From Stardom for Documentary Feature. That means a lot of major contenders got nothing but a slice of the pizza that DeGeneres handed out to the more celebrated members of the Dolby Theater audience. Of the nine finalists for Best Picture, five got totally stiffed: a putative frontrunner, American Hustle, plus Captain Phillips, Nebraska, Philomena and The Wolf of Wall Street. That’s just one reason that the Academy should trim the number of Best Picture nominees from the current bloated nine or 10 to the old svelte five: It would keep the producers of the bottom four or five films from spending millions on Oscar campaigns likely to result in soul-crushing disappointment.

There’s a certain charm in DeGeneres’ pretense that hosting the movie industry’s most watched and important show is no big deal; less charm when the whole enterprise carries the whiff of amateurism. Her call for an all-star selfie, which briefly busted Twitter, was fun (for Twitter), but the pizza-delivery gag quickly turned cold and soggy. The cameras didn’t always pick up the celebrity who needed to be glimpsed at a telltale moment. The film-clip tributes to Heroes, the evening’s theme, were often perfunctory, outshone by the clever or affecting two-minute commercials for GooglePlay, iPad Air, Pepsi and Chobani Yogurt. Oscar commercials are as fancy as Supper Bowl spots but are aimed at the predominantly female viewership; they have more references to movies and fewer kicks in the balls.

Dropping the usual opening musical number was a good idea — DeGeneres also refrained from dancing with the stars — since later Pink would be performing “Over the Rainbow” (including the infrequently heard intro) and Bette Midler was to follow the Deceased Artiste photo montage (sadly ignoring Alain Resnais, the great French director who had died at 91 the night before) with “The Wind Beneath My Wings.” The two divas were fine, but Idina Menzel gave a sloppy, overly mannered reading of “Let It Go.” Perhaps she was frazzled when presenter John Travolta, in an almost Olympic feat of dyslexia, announced, “Please welcome the wickedly talented, one and only Adele Dazeem.” Now everyone wants a John Travolta-style name at an awards show.

So one had to go trolling for incidental pleasures, guilty or otherwise: Leto’s pledge of solidarity to viewers in Venezuela (where the broadcast network had dropped carrying the show) and Ukraine; Bill Murray’s elegiac adding to the list of cinematographer nominees “And Harold Ramis for Caddyshack, Ghostbusters and Groundhog Day“; cinematographer Emanuel Lubezki’s thanking of his teachers — “not all of them but some of them”; and the acceptance speech of Laurent Witz, the upset winner of Animated Short for Mr. Hublot. (How could we not have urged readers to vote for that wonderful film?) Holding a paper with the names to thank, the director’s hands literally shook with nervous joy. In front of a billion or so viewers, Witz was palsied with pleasure.

Nyong’o, another Oscar novice, was more poised, and even more touching. She gave the finest performance of the young 2014. 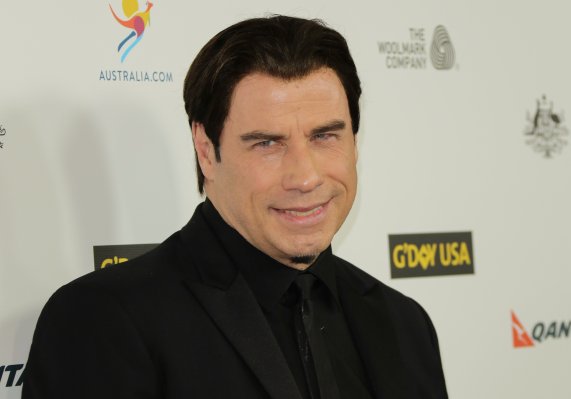