A winter storm shut down Washington D.C. on Monday as this year’s cold, snowy winter continued to batter the weather-weary country.

The federal government was shuttered Monday, and the House and Senate canceled votes scheduled in the evening, reports Politico, due to the snowstorm set to bring over 5 inches of snow into the nation’s capital. The House was scheduled to vote on a series of resolutions, including one that calls for an end to violence in Venezuela. Washington’s closing also comes as Congress mulls a response to Russia’s invasion of Ukraine.

President Barack Obama, however, defied the poor weather by going ahead with his meeting with Israeli Prime Minister Benjamin Netanyahu at the White House. The Supreme Court was also expected to hear oral arguments.

The mid-Atlantic region was hit by five inches of snow across West Virginia, Virginia, Delaware, Maryland and New Jersey, according to Accuweather. Sleet was reported from Texas to Tennessee, and over 2,000 flights were canceled.

While the weather in the Mid-Atlantic continues to be cold and dreary, conditions in Alaska are unseasonably warm. Competitors and dog sled teams in the annual winter 1,000-mile Iditarod race faced weather uncomfortably warm for dogs as temperatures hit the high teens over the weekend, reports the Daily Mail. 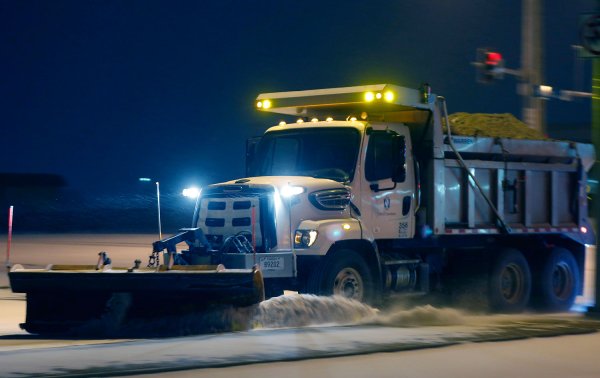 Another Winter Storm to Blast U.S.
Next Up: Editor's Pick