Pulp Fiction at 20: When Cannes Was Cool

He probably didn’t mean to, but Quentin Tarantino upstaged the Cannes Film Festival’s Palme d’Or ceremony on Saturday just by showing up.

One of the world’s most famous directors appeared last night with Uma Thurman, his star in Pulp Fiction and the Kill Bill films, to present Cannes’ top award to Nuri Bilge Ceylan, a Turkish auteur esteemed by cinephiles around the world but next to unknown in America. QT is known here, there and everywhere. Pinwheeling ideas and opinions, and wearing his charisma like a raffish musk, he has a star quality that few of the “stars” at the 67th edition of the world’s biggest movie convention could match.

He arrived here on Friday, gave a 45-min. press conference / master class in film, then joined Thurman and John Travolta at a showing of one of his most beloved movies on a giant screen on the beach, the Riviera resort version of a drive-in theater. “I’ve seen Pulp Fiction under every circumstance a person can see it except this one,” he said, encouraging the gleeful crowd to “rip out a joint and light it up.”

Twenty years ago this weekend, Tarantino was just a movie geek, hitting the Cannes competition with his second feature. He was 31, the Festival 47. But so much was different back then, before the Internet crush that makes Cannes a frantic routine of writing reviews and trend pieces each day. In the ’90s, critics probably saw more films over the 12-day span than they do now — I’d guess 50 or so — but the pace was almost leisurely for those of us on weekly deadlines. We digested all the movies, totted up the prize winners and then wrote wrap-ups for our papers and magazines.

Another difference: film was still film — giant reels of 35mm stock with sprocket holes, just like what D.W. Griffith had used 80 years before to shoot The Birth of a Nation. At his Friday press conference, Tarantino lamented that Pulp Fiction was the only picture at the 2014 festival shown on film, not digitally. “Digital projection is the death of cinema as I know it,” he said. “The fact that most films are not presented in 35mm means that the war is lost. Digital projection — that’s just television in public. … But what I knew as cinema is dead.” In 1994, Pulp Fiction was screened — at first for a few critics in the Olympia Theatre two blocks behind he Cannes Palais — on mighty 35mm. Those of us in that select crowd, including Roger Ebert and Todd McCarthy, knew we were seeing something special. It became the most influential movie of its decade.

In the ’90s, Hollywood studios that brought films to Cannes also spent more money wooing the critics: they threw parties at the local beach restaurants and occasionally at the Hotel du Cap’s fabulously fancy Eden Roc, down the coast in Antibes. That was where Harvey Weinstein of Miramax Films hosted a luncheon for Pulp Fiction. A couple dozen of us sat outdoors at tables with Tarantino, Travolta, Bruce Willis and Samuel L. Jackson. An autodidact with a deeper knowledge of genre films than any of us possessed, Tarantino seemed to enjoy filling us with anecdotes and lore. A gorgeous day on the Côte d’Azur, sumptuous food, and good company talking about a terrific film: in 1994, that’s what movie critics called work.

In the competition for the Palme d’Or, the smart money that year was on Krzysztof Kieslowski’s Red, the climax to the estimable Polish auteur’s Blue/White/Red trilogy. Most critics had gone rhapsodic over the Kieslowski films, but it’s likely that none of the Jury members had seen the first two installments. Pulp Fiction was its own trilogy, three interlaced segments, in one two-and-a-half-hour explosion. On closing night, Jury President Clint Eastwood — a man who likes to take his time — drew out the tension, saying, “The Palme d’Or … goes to… Pulp Fiction.”

Pandemonium and protest, as Tarantino, Travolta, Jackson, Willis, co-star Maria de Medeiros and producer Lawrence Bender mounted the stage. Many cheers, some derisive whistles. Before the director spoke, a woman in the audience shouted, “It’s a scandal!” Tarantino smiled and said he never expects to win prizes from a jury, “because I don’t make the kind of movies that kinda bring people together. I kinda make movies that kinda split people apart.” With mistress of ceremonies Jeanne Moreau translating into French, he thanked his cast — “They made a pretty damn good script an obsolete document” — and “the brothers Weinstein, for backing me 100% and letting me make the movie I wanted to make.”

Twenty years later Tarantino is still working with the Weinsteins (now at The Weinstein Company, rather than Miramax), still trying to please his toughest audience: himself. “I make them for me,” he said at Friday’s press conference, “and everybody else is invited.” The director had not invited anyone to read the first draft of his script for the Western The Hateful Eight when it was leaked online in January, and he cried betrayal and issued law suits.

“I have calmed down a bit,” he said here. “The knife-in-the-back wound is starting to scab.” Last month he directed a public reading of the script with some of its prospective stars, including Jackson, and was encouraged to keep rewriting. He said he might produce the finished work as a play.

(READ: What’s inside The Hateful Eight?)

Asked about director’s cuts — reworked and extended versions of his old films — he said, “My director’s cut in America plays in 3,000 theaters, not on some ghettoized DVD as an afterthought.” Yet he did assemble a longer amalgam of the two Kill Bill movies, called Kill Bill: The Whole Bloody Affair. And at Cannes he said he was considering weaving 90 minutes of outtakes from Django Unchained into the two-and-a-half-hour theatrical cut to create a four-hour miniseries shown on pay cable. “You present somebody with a four-hour movie and they roll their eyes — ‘I don’t wanna watch that.’ But then you actually show them a four-part miniseries that they like, and they’re dying to watch all four episodes in one go.”

Last night, after he handed Ceylan the Palme d’Or, Tarantino was on stage again to introduce a 50th-anniversary screening of Sergio Leone’s Fistful of Dollars. At his press conference, he had said that Fistful “means not just the birth of the Spaghetti Western, which is undoubtable, but it’s the birth of genre action cinema as it’s come to be known.” One unique pop-film artist paid tribute to another, and stirred memories of his own early prime on the Riviera — back in ’94, when Cannes was cool. 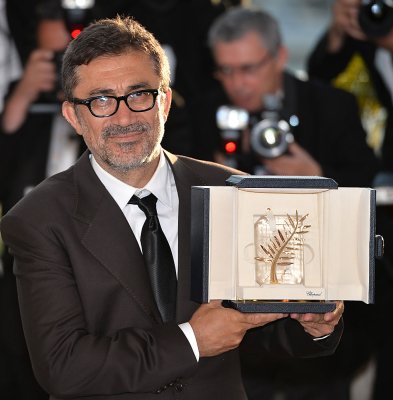