Pope Francis leaves the Amman stadium after celebrating a mass on May 24, 2014 in the Jordanian capital.
Patrick Baz—AFP/Getty Images
By Nolan Feeney

Pope Francis called for a peaceful end to Syria’s three-year-old civil war during a Saturday stop in Jordan on his first Holy Land trip as pope.

“This great goal urgently requires that a peaceful solution be found to the crisis in Syria, as well as a just solution to the Israeli-Palestinian conflict,” he said alongside Jordan’s King Abdullah II in remarks that departed from the script, Reuters reports.

The pope also commended Abdullah for his efforts in seeking “lasting peace for the entire region.” Millions of Syrian refugees have fled to Jordan and other nearby countries during Syria’s civil war, which has killed more than 160,000 people so far.

Pope Francis also addressed the conflict during Friday mass at the International Stadium in Amman.

“Peace is not something which can be bought; it is a gift to be sought patiently and to be ‘crafted’ through the actions, great and small, of our everyday lives,” he said.”I also embrace with affection the many Christian refugees from Palestine, Syria and Iraq: please bring my greeting to your families and communities, and assure them of my closeness.” 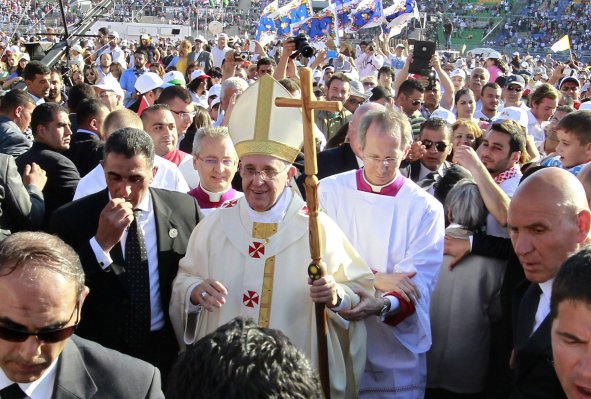