Karen Short’s prayers were answered. When her missionary husband John Short, 75, was detained in North Korea last month, she asked people to pray for his release. On Monday, local time, North Korea announced it was expelling the Australian-born Hong Kong resident. He has since landed safely in Beijing.

Short’s release came after he was photographed reading what was likely a carefully staged, forced confession. “I deeply apologize for what I have done by spreading my Bible tracts on February 16th the birthday of his Excellency Kim Jong Il,” he said, according to an account published by KCNA, a government mouthpiece. “I realize that the mass media of the USA and the western countries who say that the DPRK is the closed country and has no religious freedoms is inaccurate and wrong.”

It is not clear whether or not Short did, in fact, distribute Biblical tracts on Feb. 16. But shortly after his arrest, his wife told TIME her husband traveled to North Korea carrying religious pamphlets titled “Does it matter what I believe?” “He knew that the documents he was carrying are illegal and that the information he wanted to spread is not welcome,” she said on Feb. 19. “He is always going to places where religion is not welcome to spread the word.”

When it comes to foreigners, North Korea has very clear red lines: unauthorized reporting, spying and proselytizing. In 2009, U.S. journalists Lisa Ling and Euna Lee were arrested for allegedly crossing into North Korea at the Chinese border. Late last year, Merrill Newman, an 85-year-old American was detained for his Korean-war era involvement in clandestine operations. North Korea last week revealed it is holding a 50-year Baptist minister from South Korea. American Kenneth Bae was arrested in 2012 and sentenced to 15 years hard labor. He, like Short, is a missionary.

The Kim clan has a complex relationship with Christianity. Missionaries came to the Korean peninsula at the turn of the last century and quickly gained ground. North Korea’s founding father, Kim Il Sung, was born, in 1912, to a Protestant family. By the 1940s, Pyongyang was home to so many Christians that people called it “The Jerusalem of the East.” After the country was split, Kim Il Sung turned the country away from the faith, banning bibles and closing Churches. There was to be one faith: the cult of Kim.

In North Korea, the Kim men are revered like gods. Children are taught that they have almost supernatural powers and their portraits are granted pride of place in schools and homes. In 1912, the country switched from the Christian calendar to where time begins April 15, 1912 — Kim Il Sung’s date of birth. His son, Kim Jong Il, is said to have shot 11 holes-in-one in his first game of golf. His date of birth — the date of Short’s alleged transgressions — is a holiday.

Which begs the question: Why was Short released at all? North Korean state media said Short, like Merrill Newman, was expelled because of his age. The timing may have helped too. After a year of saber-rattling, North Korea has taken a softer tone of late. Last week, South and North Korea held the first round of family reunions since 2010, when the program was canceled after the sinking of a South Korean naval vessel. The meet went ahead despite the fact it coincided with U.S.-South Korea military drills that the North detests.

The reaction to the drills is particularly telling. Last year, the exercises brought threats of nuclear Armageddon. This year, North Korea fired a few short-range missiles into the sea off its eastern coast. Kim Jong Un has pledged to press ahead with the development of the country’s nuclear arsenal while simultaneously improving the country’s sanction-choked economy. The strategy seems to be to keep up appearances at home (look, we’re firing missiles) while quietly re-engaging the outside world (look, we’re releasing prisoners).

What is still unclear is how remaining prisoners like Bae and Kim fit in. Neither is elderly and North Korea tends to take a tougher stance on ethnic Koreans in custody, partly because they are seen as traitors, and partly because non-U.S. nationals, like Kim, are deemed less likely to garner concessions from the United States. The latest developments could bode well for Bae. If North Korea is serious about setting a new tone, the missionary’s release might be offered to the U.S. as a sign of good faith. 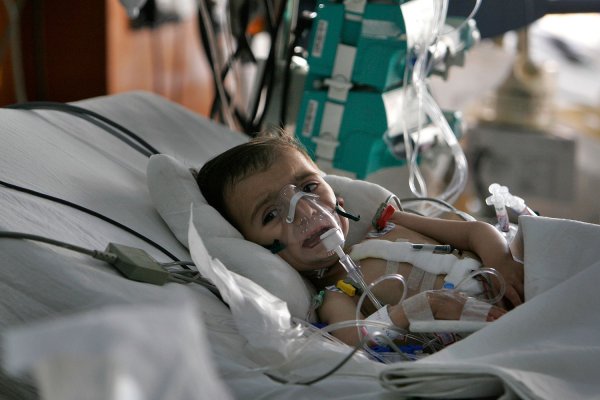 Indian Hospitals Are Doing a Roaring Trade in Medical Tourists From Afghanistan
Next Up: Editor's Pick