Rafael Nadal of Spain in action against Mikhail Youzhny of Russia during day 5 of the Internazionali BNL d'Italia 2014 on May 15, 2014 in Rome.
Michael Regan—Getty Images
By Sean Gregory

What to make of this year’s French Open, which starts on Sunday? Call it confounding, call it confusing, call it delightfully compelling.

On the men’s side, you’ve got one player, No. 1 Rafael Nadal, who has won eight of the last nine championships. Nadal has 13 career Grand Slams titles, leaving him just four short of Roger Federer’s all-time record of 17 (and one short of Pete Sampras’ tally of 14). Nadal reached the final of the Australian Open, but hampered by a bad back, he lost to Stan Wawrinka of Switzerland. Before Wawrinka’s victory, 34 of the prior 35 Grand Slams titles were won by one of four players — Nadal, Federer, Novak Djokovic or Andy Murray.

Welcome to the club, Stan.

Since then, Nadal — the subject of a feature story in this week’s TIME — has not really been himself. In March, he lost in the third round of the Indian Wells tournament in California; then Djokovic crushed him in the final in Miami. But these were hard-court contests. As usual, Nadal would right himself on clay, correct?

But in three of the four clay-court tournaments before the French Open, Nadal — gasp — lost. Most recently, Djokovic handled him fairly easily in the final in Rome. Nadal hasn’t lost three pre-French Open tournaments on clay since 2003, when he was 16 years old. And now Djokovic owns a four-match winning streak against Nadal. So Djokovic, the world No. 2, is the favorite, right?

But Nadal does have habit of winning the French Open almost every time he sets foot in Paris. See, confounding.

Last year, Nadal and Djokovic met in the semifinals, and they played a classic five-setter which Nadal won. If we’re lucky, they’ll meet in this year’s final, and we’ll truly learn about the state of Rafa’s game. No Roland Garros win, not good.

The draw did Nadal no favors. The two other players who beat Nadal on clay this year sit on his side of the bracket. Nicolas Almagro beat him in Barcelona; he’s a possible fourth round opponent for Nadal at the French. Another fellow Spaniard, David Ferrer, could meet Nadal in the quarters. Nadal beat Ferrer in last year’s French Open final; Ferrer defeated Nadal this year at the Monte Carlo tournament.

Andy Murray is on Nadal’s side of the draw too. Murray, however, has never won a clay court tournament. Wawrinka, who defeated Federer in the Monte Carlo final, is a possible semifinal opponent for Nadal. After winning the Aussie and starting the clay court season with the Monte Carlo victory, Wawrinka seemed ascendant. But he then lost his first match in Madrid — a clay tournament Nadal actually won this year — and Tommy Haas knocked Wawrinka out of Rome, in the round of 16.

Federer’s path to the semis — and a possible meeting with Djokovic — doesn’t seem that fraught. Federer turns 33 this summer, but is eager to win another Slam or two, to further distance himself from Nadal. Look out for Tomas Berdych, an potential quarterfinal opponent for Federer: the Czech has faced Federer just three times on clay, and lost each match. But he’s also beaten Federer two of the last three times they’ve met. Federer did defeat Berdych in the their last bout, the final of the Dubai tournament in early March.

“Ten years ago, I would maybe already become number one,” Berdych said during an interview at the Monte Carlo tournament. “But you know, not with these guys.” Tough luck, Tomas.

While the men’s game is blessed with the “Fab Four” and plenty of other top talents, the women’s game, right now, still mostly revolves around Serena Williams. The defending French Open champ cruised to the title in her last clay court tournament, in Rome last weekend. Serena could meet her sister Venus in the third round, and Maria Sharapova in the quarters.

On the other side of the draw Li Na — the world no. 2 and 2011 French Open winner, and subject of another TIME feature story — enters the tournament on a bit of a downswing. She lost in the quarters on clay in both Rome and Madrid. Serena seems at home in Paris, and is a comfortable pick to win the women’s title.

The same can’t be said for an eight-time Roland Garros champ. Indeed, an intriguing tennis summer has arrived. 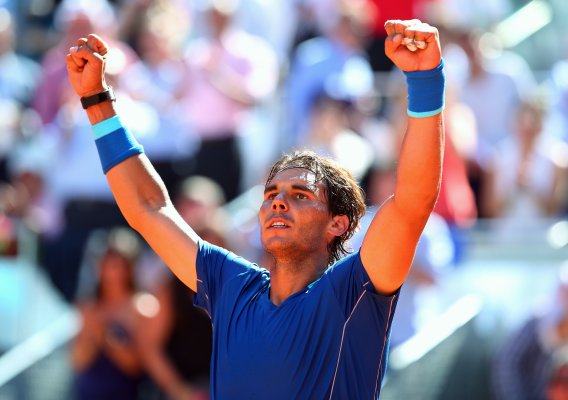