A Ukrainian woman reacts as troops in unmarked uniforms hold positions in Perevalnoye, a small Ukrainian base roughly 15 miles south of Simferopol on Sunday, March 2, 2014. About two dozen Ukrainian soldiers could be seen behind her.
Yuri Kozyrev—NOOR for TIME
By Michael Crowley

Two days after Vladimir Putin defied President Obama’s warning not to intervene in Ukraine‘s Crimea region, administration officials said they are already taking punitive economic and diplomatic action against Russia and warned, in the words of one, that “the Russians have badly miscalculated here.”

But the same officials steered clear of suggestions that they are considering a U.S. military role to protect Ukraine from Russian encroachment.

“Right now I think we are focused on political, economic and diplomatic options,” said an administration official, when asked whether the use of force was under consideration. “I don’t think frankly that would be an effective way to de-escalate the situation.”

De-escalation is clearly the administration’s preference. On a Sunday conference call with reporters, officials suggested that international monitors under the auspices of the Organization for Security and Co-operation in Europe could ensure the protection of ethnic Russians in Crimea and eastern Ukraine. On a trip to Vienna this week, Assistant Secretary of State for European and Eurasian Affairs Victoria Nuland will discuss with OSCE officials whether monitors could replace Russian forces in those regions “if Russia can be persuaded to pull back,” one official said.

Putin has claimed the the threat to Russians within Ukraine from anti-Moscow nationalists—often described by Kremlin allies as “fascists”—as a justification for Russian military action. His rejection of a credible plan to send monitors would affirm suspicions that his actions constitute a grab for territory and an effort to intimidate Kiev, where street protesters toppled a pro-Moscow government last month. In a 90-minute telephone conversation between Putin and Obama on Friday, the official said, Putin “did not slam the door” on the idea of OSCE monitors, “but there was agreement to continue to discuss.”

There’s little sign that international condemnation is giving Putin pause, however. One official said that more than 6,000 Russian airborne and naval forces have “complete operational control” over the Crimea, a peninsula which belonged to Russia until 1954 and where the country still operates a major naval base with the consent of Ukraine, its former fellow Soviet Republic. “They are flying in reinforcements,” added this official, “and they are settling in.”

Efforts are thus underway in Washington to isolate Russia internationally. They include the cancellation of planning meetings for U.S. attendance at a G8 summit in Sochi this June—and a potential move to kick Russia out of the union of economic powers altogether. “Russia’s actions are incompatible with the underlying principles that allowed us to bring them into the G8 in the first place,” said one official.

While some observers warn that Washington’s leverage over Moscow is highly limited, the officials portrayed Putin as having committed a strategic blunder that will bleed his country’s economy, which has been boosted in recent years by high oil prices—Russia is a major exporter—but has recently grown stagnant.

“What we see here are distinctly 19th and 20th century decisions to address problems, deploying military forces rather than negotiating and talking,” said one official. “But [Putin] lives in a 21st century world” of interconnected economies, leaving his country exposed to potential sanctions from its European trade partners in particular. “Russia’s economy is quite vulnerable, given the level of integration, to market reactions,” said another official, adding that the ruble has lost 8.6 percent of its value this year.

The official also would not rule out the possibility of highly targeted sanctions, like those applied to Iran and North Korea, singling out key individuals and companies at the center of the country’s power structure.

But when asked whether they think Putin is prepared to change his behavior in response to the tough talk from Washington and other European capitals, the officials demurred.

“We in this administration have made it a practice to not look into Vladimir Putin’s soul,” said one. 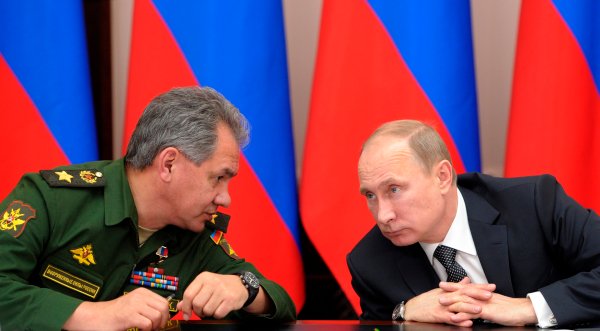