HP’s Massive Layoffs Are Doing Wonders for Its Stock Price

Thursday Hewlett-Packard announced that it plans to cut an additional 11,000 to 16,000 jobs as part of its restructuring, and Wall Street reacted with glee. The company’s stock is up more than 6 percent on Friday, trading at nearly $34 per share as of 12:30 p.m Eastern. If the stock can stay at its current price all day, it will be the highest close for HP stock since 2011.

A layoff announcement is said to be an easy way to goose a company’s stock price since it’s a sign that a firm will be lowering expenses (read: employees) in the future. That logic seems to have held true for HP, but it’s not always the case. When Cisco announced it was laying off 4,000 employees back in August, the company’s stock tumbled 10 percent in after-hours trading. On the other hand, when Citigroup said it was eliminating 11,000 jobs back in the fall of 2012, the company’s stock leapt 5 percent.

It’s not clear exactly why investors have responded to well to HP’s announcement. The company posted earnings that met but did not exceed analysts’ expectations, while it still faces significant headwinds due to declining PC sales and a shift by businesses toward cloud computing, where the company is not yet a significant player. But HP still generates significant profits, making $1.3 billion in the most recent quarter. Those earnings may rise with a leaner workforce. 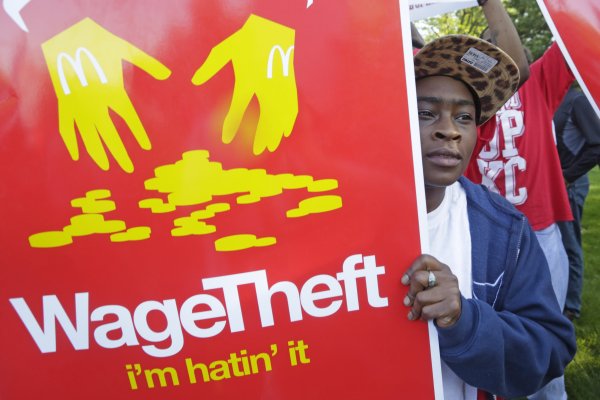 McDonald's CEO: 'We Pay Fair Wages'
Next Up: Editor's Pick