In this photo reviewed by the U.S. military, military personnel walk in the now abandoned Camp X-Ray, which was used as the first detention facility for al-Qaida and Taliban militants who were captured after the Sept. 11 attacks at Guantanamo Bay Naval Base, Cuba, on Nov. 21, 2013.
Charles Dharapak—AP
By Massimo Calabresi

On the surface, Thursday seemed to be another bad day in the Democrats’ five-year run of failed efforts to close the military prison at Guantanamo Bay. In the final House debates over the bill to authorize Pentagon programs for 2015, Republicans shot down an amendment by the top Democrat on the House Armed Services committee that would have closed the facility.

But even as that vote was going down in the House, the savvy Sen. Carl Levin of Michigan was chairing a closed session of the Senate Armed Services Committee on the other side of the Capitol building that delivered broad Republican support for a number of measures that would allow President Obama to close the prison. “We made major progress,” Levin said as he emerged from the Chairman’s mark up of the Senate bill, which passed out of committee 25-1, “We’ve created a path to close Guantanamo.”

Levin’s cleverly constructed language provides Republicans and Democrats multiple opportunities to take political cover even as they allow Gitmo closure to move forward. But Obama will need to spend political capital to preserve Levin’s language when the House and Senate merge their bills late this year.

Levin’s bill allows the Secretary of Defense to transfer the remaining 155 detainees at the Guantanamo Bay military prison facility to the U.S. for detention as prisoners of war, trial and incarceration, if President Obama submits a detailed plan for doing so. The bill gives Congress an expedited route to pass a joint resolution disapproving of the President’s plan, and blocking it. But to stop closure, lawmakers would have to overrule an Obama veto of the resolution. Overriding a presidential veto requires a supermajority of the Senate, usually 67 votes.

Republican Senator Lindsey Graham authored the language in the bill on the joint resolution, and after the Chairman’s mark-up on Thursday, he told TIME “I’m confident there’s a bipartisan majority in the House and the Senate that would say no to closing Guantanamo Bay now.” However, he said in the future he is open to housing detainees in the U.S. “We had 50,000 German prisoners of war [in WWII], I know we can do this,” he said. “But I want to know what kind of legal system we are going to use.”

Graham’s language was supported by all Republicans and Democrats in the Chairman’s mark, and it would provide a test of Americans’ willingness to detain and try high-value al Qaeda detainees in the U.S. The Obama administration has been busy trying to revive public support. On Tuesday, a court in New York convicted radical Islamic cleric Abu Hamza al Masri and Attorney General Eric Holder quickly touted the result as the latest in “a trend of successful prosecutions of top terrorism suspects.” In April, Holder traveled to New York to personally congratulate the team that successfully prosecuted a former Osama Bin Laden aide, Abu Ghaith. And closure advocates have pointed to the messy and halting military trials in Guantanamo to argue justice would be better and more quickly served in the U.S.

But the real test will come when the House and Senate reconcile their two versions of the 2015 Defense authorization bill, likely after the mid-term elections late this year. Last year, Levin managed to keep some pro-closure provisions in the final 2014 bill, but lost out on others. Keeping the closure provisions “would take a lot of political capital” says one Congressional staffer familiar with negotiations over the bills and would require Obama to “get the political pressure lined up to make it happen.” 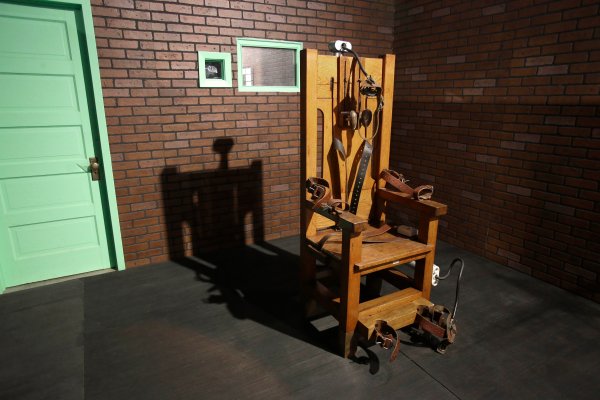 Tennessee May Bring Back the Electric Chair
Next Up: Editor's Pick