A Tale of Two Sisis

For Abdul Fattah al-Sisi, life has gotten better and better since the overthrow of Hosni Mubarak.

The career military man was doing well even before the popular revolt of January 2011 ended the three-decade reign of the Egyptian president: al-Sisi sat on the general staff, holding the delicate portfolio for military intelligence.

But he was just getting started. When the Muslim Brotherhood’s Mohamed Morsi was elected president in 2012, al-Sisi was named minister of defense, as well as chief of general staff. And when Morsi fell out of favor with Egyptians a year later, with millions marching for his removal last June 30, al-Sisi rose to the occasion, removing the country’s first and only freely-elected president in a coup that most Egyptians call a second revolution.

In January he was promoted to Field Marshal, and polls say that in balloting that begins Monday, he will be elected president.

The scope of the challenge now facing the next president might best be understood by the post-Revolution experience of another al-Sisi. Mohamed Mahmoud al-Sisi shares the family name with the candidate, but that’s all. In 2011, he had his own business selling finely crafted gold jewelry made in a shop he owned. He commuted daily from a Cairo suburb, and says he took home 5,000 Egyptian pounds a month, worth about $870 at the time. His wife and four daughters, aged 12 to 3, ate fish one night, chicken the next, beef when they liked. Money was not a problem—he had so much, he says, he was investing in the Egyptian stock market–but governance was. So he joined the throngs in Tahrir Square, chanting the slogan of the Revolution, “Bread, Freedom, Dignity, Social Justice,” and cheered when Mubarak surrendered his office.

Then his troubles began, he says. First, the stocks collapsed. The father of four had invested in companies that looked rock solid under Mubarak, including Ezz Steel; its shares plummeted from $25 just before Tahrir to $5 after its president, a Mubarak man, was convicted of money-laundering.

Egypt became a dangerous place, and not just to investors. The political uncertainty created a security vacuum, and crime rates soared. One day men with knives confronted al-Sisi as he left his workshop, carrying finished gold jewelry to client shops. The thieves took it all.

“I was a gold maker and I had my own workshop, and I lost all my money and now I’m doing this,” says al-Sisi.

He stands in a Cairo alley, holding a platter. On the platter are paper plates. Some hold peanuts. Others, chick peas. Each plate sells for two Egyptian pounds, or about 23 cents. His government ID card still reads “gold maker” but al-Sisi, 40, spends his workdays moving through the side streets of Zamalek, a relatively prosperous island in the Nile, imploring people smoking water pipes to buy one of his snacks.

His monthly income, which formerly approached $900, now ranges from $84 to $125. Most nights the girls eat macaroni and rice. “Some vegetables, but not much,” he says. The family has meat only on feast days, two or three times a year. “Now fruit is the third priority. I know it’s important to my children, but first I have to feed them,” al-Sisi says. “My children love apples, the red and the yellow. Now when they are asking for it, I just cry. I cannot afford it any more.”

The candidate al-Sisi is asked constantly about the economy. By some measures, 25 percent of Egyptians live in poverty. By others, the measure approaches 50 percent. A poll released Thursday by Pew Research Center found that 76 percent of Egyptians describe the economy as “bad,” up from 64 percent just after the revolution. Tourism is staggering, and hard currency is so scarce the government has been failing to pay the international firms that pump its oil.

“If things go according to the plan we have prepared, we will see an improvement in two years,” the former field marshal told Sky News Arabia in a May 11 interview. Except for championing energy-saving lightbulbs, however, he has declined to share his economic plan with Egyptians, or anything else that would constitute a platform.

A few days before balloting began, his campaign released a color-coded “Map of the Future,” which appeared to recycle a 30-year-old plan to create a band of cities in what is now desert. Critics say the expense would be beyond Egypt’s means, already burdened by subsidies that keep the prices of food and fuel artificially low, and deter investment.

The al-Sisi selling peanuts says he might not even vote. “Most likely he will be like Mubarak,” he says, of the candidate who shares his name. “This is their nature, the men from the army.” He admits only to the dimmest flicker of hope, rising from the general’s personal religious piety. “Yes,” he says, “this is a very good and important point, and yes it gives hope. But only if the whole system is changing. Otherwise it’s not enough.”

“I will not speak big words,” Mohamed al-Sisi says. “All I care about is that they give people the minimum wage, not less. And that they cast a kind look to the poor people. Social justice.” 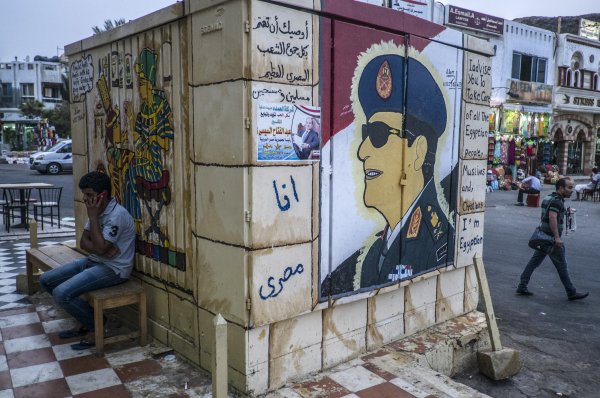 Egypt Veers Toward Return of Security State
Next Up: Editor's Pick