Cannes chugs to its conclusion, like a Riviera train overfreighted with international stars and world-class directors. They are all anxiously awaiting the Saturday closing ceremony, at which a jury headed by filmmaker Jane Campion will bestow its awards, above all the coveted Palme d’Or for best picture. Last year that prize went to the sexy French drama Blue Is the Warmest Color. This year — who knows? Among the 18 films in competition, some have staked strong claims, including two bio-pics — Mike Leigh’s Mr. Turner and Bennett Miller’s Foxcatcher — and Xavier Dolan’s turbulent family psychodrama Mommy.

We have covered those films in previous Cannes reports, and will address one more contender, Nuri Bilge Ceylan’s Winter Sleep, before tomorrow’s prize show. Below are short appraisals of six important movies with a prayer for the Palme and a good chance to reach U.S. theaters.

TWO DAYS, ONE NIGHT. Marion Cotillard has earned an Oscar, as Edith Piaf in La vie en rose in 2008, but never a Cannes Best Actress award. In her fourth consecutive year at the Festival (after Midnight in Paris, Rust & Bone and The Immigrant), the luminous star insinuates herself convincingly into the role of a working-class wife and mother in this excellent effort from Jean-Pierre and Luc Dardenne. Two-time Palme d’Or winners for Rosetta (1999) and L’enfant (2005), the Belgian brothers cast Cotillard as Sandra, on leave for depression from her job in a Seraing solar-panel factory. Learning she is to be laid off after a vote of her coworkers, Sandra must spend the weekend petitioning them to change their minds before a Monday re-vote and let her stay, which means each employee would forfeit a 1000-Euro bonus.

The Dardennes’ original conception was to pit a below-average worker against the wavering consciences of her peers. But their on-screen Sandra is just a decent woman out of work and luck. Canvasing her 14 colleagues in a secular Stations of the Cross, she lays out her case to each one (in scenes shot in one long take) and gets different, often poignant reasons for their yes or a no. This race-against-time scenario lends an urgency to the socialist maxim, “From each according to his ability, to each according to her need,” that is at the heart of the Dardennes’ concern. This might be a provocative film with any leading lady. With Cotillard — looking fatigued yet fabulous in tank tops and jeans as Sandra makes her desperate rounds — it is also an actor’s triumph. —M.C.

(READ: Mary Corliss on the Dardennes’ The Kid on the Bike)

THE SEARCH. In any festival, the most eagerly anticipated film often turns out to be the most disappointing. That is the fate of this 2½hr. super-serious war-and-remembrance film from Michel Hazanavicius, whose blithe wordless comedy The Artist premiered at Cannes two years ago and won Academy Awards for best picture, writer, director and leading actor. Set in a Chechnya devastated by war, and loosely based on the 1948 Fred Zinnemann film of the same title, The Search puts an NGO dogooder (the excellent Bérénice Bejo) in touch with a Muslim Chechen child (Abdul Khalim Mamutsiev) traumatized by seeing his parents slaughtered by Russian soldiers. Learning, hugging and copious finger-pointing ensue, not least in the film’s depiction of a young soldier (Maxim Emelianov) so brutalized by his training, in Full Metal Jacket style, that he is turned into a soulless killer.

Hazanavicius says he made the film “to oppose the absurd theory according to which all Chechens are terrorists.” That is absurd. Not all Chechens, or Afghans or Somalis, are terrorists. But some are, and their actions brought the Russian army into Chechnya. Another discredited theory is that the mediocre, muddled followup to any Oscar-winning film deserves a choice spot in the Cannes competition. —R.C.

WILD TALES. “Pasternak,” the first of six stories in Argentine writer-director Damián Szifron’s omnibus comedy, is the shortest. The people on a flight slowly realize that they all knew a man named Gabriel Pasternak, that they in some way wronged him and that he secretly paid for their tickets. Finally they learn that Pasternak has taken over the cockpit and is about to crash the plane.

Beginning with this deliciously sour anecdote — the only terrorist-hijacking story we know of that’s played for comedy — Szifron weaves a tapestry of outrageous revenge in fables set in a roadhouse diner (“The Rats”), on the open highway (“Road to Hell”), in a DMV office (“Bombina”), among the corrupt members of a rich family (“The Bill”) and at a wedding ceremony where the bride learns her new husband has had affair with one of the wedding guests (“Till Death Do Us Part”). Except for “The Bill,” they are smart, tart, beautifully performed mini-epics of grievance escalating to a kind of sanctified madness. Wild Tales deserves Cannes’ Screenplay prize, and your delighted patronage when Sony Pictures Classics opens this in the U.S. —M.C.

MAPS TO THE STARS. Obscene misanthropy enlivens this inside-Hollywood comedy written by Bruce Wagner and directed by Canada’s David Cronenberg, more than 40 years into his film excavations of the human body as its own deadly parasite (Rabid, The Fly, Naked Lunch). Diseases of the heart and spirit ravage the entire movie business, most prominently a guru-masseur (John Cusack), his stage-moth wife (Olivia Williams) and their two kids — one a obnoxious TV moppet crashing into puberty (Evan Bird), the other a refugee from the loony bin (Mia Wasikowska).

In addition to ghosts, incest, strangulation and a tantric three-way, the movie zings with some of the raunchiest, most knowing dialogue since the almighty Heathers a quarter-century ago. (One of the milder exchanges: a Bieber-like teen star, played with regal ennui by Justin Kelly, says he can sell his excrement for $3,000 a poop, in part because “It’s got rice in it from Nobu.” And when he has diarrhea, it’s like “summer clearance.”) Oddly, Cronenberg’s staging of this delirious material is a little pokey, but worth sitting through for the sheer transgressive jolt — and for Julianne Moore’s fearless, pitch-perfect performance as an aging actress trying for one last great part. Moore might deserve the Best Actress award but, given the film’s corrosive raillery, won’t get it. —R.C.

THE CLOUDS OF SILS MARIA. Call it All About Eve in the Swiss Alps. In that Joseph Mankiewicz Oscar-winner, Bette Davis was the aging actress, Anne Baxter the ingenue avid to steal her star luster. In Olivier Assayas’s update, Maria Enders (Juliette Binoche) is the modern Davis: a middle-aged actress who won early fame as the scheming young Sigrid in the play Maloja Snake, and who is now asked to take the role of Helena, the older victim, in that play’s revival. Sigrid is to be played by Jo Ann Ellis (Chloë Grace Moretz), a teen hottie with a scandalous rep. To prepare for a part that forces her to acknowledge her vanished youth, Maria rehearses with her assistant Val (Kristen Stewart). But which young woman is Eve? Both Val and Jo Ann carry themselves with a precocious poise that in Maria has curdled into the self-doubt. She knows that stars shine brightest when they are new.

The Julianne Moore character in Maps to the Stars faced a similar challenge: she is up for a movie role once played by her dead mother. The threat to Maria is the shroud of an aging actress — the crow lines and thickening waist that Binoche, 50, wears as badges of long, meritorious movie service. Last appearing for Assayas in the lovely Summer House, an international art-house hit, she adroitly handles the competition and collaboration of Twilight star Stewart, whose crafty lack of affect shows to fine advantage in what may be her most complex screen role. Moretz, at 17 segueing from child roles, has just a few scenes to prove Jo Ann is wiser than her tabloid escapades would indicate. Another Cannes entry that showcases for excellent actresses, Sils Maria needs a bit more tension in its telling — and a change of its confounding title. —M.C.

(READ: TIME’s 1950 review of All About Eve by subscribing to the magazine)

LEVIATHAN. This 2hr.21min. drama by Andrey Zvyagintsev, whose The Return took the top prize 11 years ago at the Venice Film Festival, has been short-listed by some critics for this year’s Palme d’Or. It’s certainly long, bleak and politically resonant enough to win official approval. Kolya (Alexey Serebryakov), a dour handyman, has been fighting to keep his seaside property that the venal mayor (Roman Madyanov) has legally seized. In this battle he has enlisted an old Army buddy (Vladimir Vdovitchenkov), now a lawyer, who tries to buck the long odds but is more interested in Kolya’s wife (Elena Lyadova).

Scenes of the frightful price that this Job-like character must pay are kept off-screen; this is, among other things, a murder mystery in which viewers must infer whodunit. But the Mr. Big perpetrator is the post-Soviet system, rewarding corruption and punishing the innocent — those poor slobs who, in a familiar Russian stereotype, smoke and drink way too much. In this middling-quality dirge, the one moment of acerbic humor comes at a shooting party, when the host brings out framed portraits of former Soviet leaders, from Stalin to Gorbachev, for target practice. “Got any more current ones?” somebody asks. The reply: “Too early. Not enough historical perspective.” —R.C. 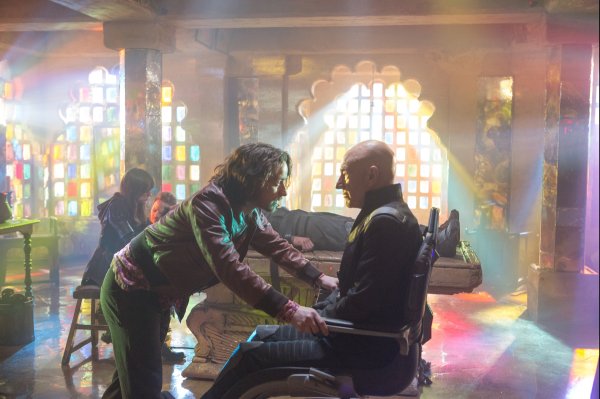 James McAvoy: X-Men's Professor X is 'Mental,' and I Like It
Next Up: Editor's Pick