Thai soldiers move foreign press on as they secure the grounds of the venue for peace talks between pro- and antigovernment groups as the army announces it is seizing power in Bangkok on May 22, 2014
Rufus Cox—Getty Images
By Charlie Campbell

Thais are all too familiar with military coups — soldiers in the street barely merit a glance. But when 7-Elevens are forced to close, the very of fabric of society seems poised to crumble. Not even during the last putsch in 2006 were these cherished convenience stores shuttered. They are now.

Thursday’s seizing of power by the military brings to an end eight years of fraught, though sustained, democracy. The constitution has been suspended (apart from those sections regarding the revered monarchy), a nationwide curfew imposed and a ban put on gatherings of more than five people.

Television stations, including international outlets like CNN, have been taken off air and strict censorship imposed on print and online media. On Friday, schoolchildren across the nation were given the day off, although the malls, markets and temples that draw 20 million tourists each year stayed open. More than a dozen leading government and opposition figures have been detained, and 155 politicians and activists banned from leaving the country.

But why is Thailand caught in this vicious cycle? Thursday marked its 19th successful or attempted coup since rule by absolute monarchy ceased in 1932, underscoring the fact that free and fair elections are futile without strong institutions to back them up. The nepotism charges that led to the ouster of Prime Minister Yingluck Shinawatra were laughable, but they showed that, in Thailand, five judges wield more power than the 15 million citizens who voted for Yingluck in her 2011 landslide win.

The spell of unrest that preceded the coup was sparked by opposition to an amnesty bill that would have allowed Yingluck’s brother, divisive former Prime Minister Thaskin Shinawatra, home from exile with corruption charges quashed. Yellow Shirts didn’t want their nemesis back in the country, and Red Shirts were not willing to pay the price this entailed — namely, that those responsible for a crackdown on Red Shirt protesters in 2006 that claimed more than 90 lives would also be pardoned.

Tens of thousands took to the street, and the bill was shelved. But it wasn’t enough. To the Yellow Shirts, Yingluck was overstepping her mandate in attempting to bring home her billionaire sibling. What followed was six months of besieged government offices, harangued civil servants and street clashes to demand her removal. These were illegal attempts by a minority to oust a majority government. To reassert her mandate, Yingluck called snap elections for Feb. 2, but the protesters scuttled the ballot process. This is a form of fascism at work.

The pall of royal succession dominates the crisis. King Bhumibol Adulyadej is beloved, but his playboy son Crown Prince Maha Vajiralongkorn is generally unpopular and spends his time carousing around Germany. Vajiralongkorn has well known ties to the Shinawatra clan, and much of the public rancor was about jockeying for advantage before the ailing 86-year-old monarch passes on the crown. For royalists, that advantage means the permanent banishment of Thaksin, which may now happen following the coup.

What can be done? Thailand last year welcomed 26.7 million tourists, including more than 800,000 Americans, accounting for 10% of GDP. Thai tourism — for better or worse — is founded on the GIs who first flocked there for R&R during the Vietnam War. Bangkok boasts one the the largest U.S. embassies in the world.

Yet the fundamentals of this situation must be changed. Washington is already “reviewing our military and other assistance and engagements, consistent with U.S. law,” according to U.S. Secretary of State John Kerry. But “trying to find some sort of compromise is going to be difficult as the stakes are as high as ever,” Tim Huxley, executive director of the International Institute for Strategic Studies–Asia, tells TIME.

Reducing these stakes is key to any resolution. The U.S. should insist upon elections at the earliest opportunity and help mediate reforms to devolve power to the regions, thus ending the “winner takes all” element to Thai elections. A semiautonomous Bangkok government chosen by Bangkok voters would take the sting out of the pro-Thaksin national government that new polls are almost certain to return. (All five elections since 2001 have been won by such parties.)

Army chief general Prayuth Chan-ocha may have a gruff exterior but is a very savvy man. He has stayed out of politics his entire career, and so to stage a coup now he must believe — rightly or wrongly — that it was absolutely necessary. But significantly, the current constitution was drafted by a military cabal following the 2006 putsch. The generals have now just torn up the system that they themselves imposed. If left unaided, what hope do they have of getting it right this time?

Foreign assistance is desperately needed to find a way through this crisis. And to resuscitate those most potent indicators of the health of Thailand’s social fabric, the 7-Elevens. 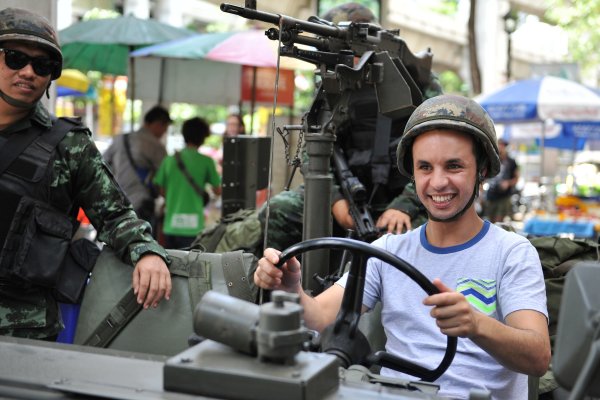 After Coup, Thailand Is Still Safe for Travel
Next Up: Editor's Pick