Many Ukrainians Want Russia To Invade

A woman waves a Russian flag as armed servicemen wait near Russian army vehicles outside a Ukrainian border guard post in the Crimean town of Balaclava March 1, 2014.
Baz Ratner—REUTERS
By Simon Shuster

To many in Ukraine, a full-scale Russian military invasion would feel like a liberation. On Saturday, across the country’s eastern and southern provinces, hundreds of thousands of people gathered to welcome the Kremlin’s talk of protecting pro-Russian Ukrainians against the revolution that brought a new government to power last week. So far, that protection has come in the form of Russian military control of the southern region of Crimea, but on Saturday, Russian President Vladimir Putin got parliamentary approval for a broad military intervention in Ukraine. As that news spread, locals in at least four major cities in the east of Ukraine climbed onto the roofs of government buildings and replaced the Ukrainian flag with the Russian tricolor.

For the most part, what drove so many people to renounce their allegiance to Ukraine was a mix of pride and fear, the latter fueled in part by misinformation from Moscow. The most apparent deception came on Saturday morning, when the Russian Foreign Ministry put out a statement accusing the new government in Kiev of staging a “treacherous provocation” on the Crimean peninsula. It claimed that “unidentified armed men” had been sent from Kiev to seize the headquarters of the Interior Ministry police in Crimea. But thanks to the “decisive actions of self-defense battalions,” the statement said, the attack had been averted with just a few casualties. This statement turned out to be without any basis in fact.

Igor Avrutsky, who was the acting Interior Minister of Crimea during the alleged assault, told TIME the following afternoon that it never happened. “Everything was calm,” he says. Throughout the night, pro-Russian militiamen armed with sticks and shields had been defending the Crimean Interior Ministry against the revolutionaries, and one of the militia leaders, Oleg Krivoruchenko, also says there was no assault on the building. “People were coming and going as normal,” he says.

But the claims coming from Moscow were still enough to spread panic in eastern and southern Ukraine. On Saturday, pro-Russian activists in the Crimean capital of Simferopol staged a massive demonstration in the city, calling on residents to rally against the “Nazi authorities” who had come to power in Kiev. “What’s happening in Ukraine is terrifying,” says one of the organizers of the march, Evgenia Dobrynya. “We’re in a situation now where the country is ruled by terrorists and radicals.”

That is the picture of Ukraine’s new government propagated in the Russian media, the main source of information for millions of people in eastern and southern Ukraine. For months, Russian officials and television networks have painted the revolutionaries as a fascist cabal intent on stripping ethnic Russians of their rights. Much of the coverage has amounted to blatant scaremongering. The key posts in the new government, including the interim President and Prime Minister, have gone to pro-Western liberals and moderates, and they have pledged to guarantee the rights of all ethnic minorities. But some of their actions have given Russia plenty of excuses to accuse them of doing the opposite.

Within two days of taking power, the revolutionary leaders passed a bill revoking the rights of Ukraine’s regions to make Russian an official language alongside Ukrainian. That outraged the Russian-speaking half of the country, and the ban was quickly lifted. But the damage was done. With that one ill-considered piece of legislation, the new leaders had convinced millions of ethnic Russians that a wave of repression awaited them. So it was no surprise on Friday when a livid mob in Crimea attacked a liberal lawmaker who came to reason with them. Struggling to make his case over the screaming throng, Petro Poroshenko was chased back to his car amid cries of “fascist!”

Making matters worse has been the role of nationalist parties in the new government, including a small but influential group of right-wing radicals known as Pravy Sektor (Right Sector), which embodies some of the greatest fears of Ukraine’s ethnic Russian minority. Its leader, Dmitro Yarosh, has openly referred to Russia as the “centuries-old enemy of Ukraine,” and has spent years training a small paramilitary force to fight what he calls “Russian imperialist ambitions.”

In the past week, Ukraine’s new leaders have been scrambling to figure out what to do with Yarosh. His role in the revolution was too significant for them to write him off. Having suffered dozens of casualties in fighting off police during deadly clashes in Kiev last month, his militia members are idolized as heroes by many supporters of the revolution across the country. “It’s a real problem,” says the pro-Western lawmaker Hrihory Nemiriya, whose fellow members of the Fatherland party now hold the interim presidency and premiership. “Right Sector people are very popular, but they are not in the government.”

Yarosh has, however, been offered top positions in Ukraine’s security structures. Zoryan Shkiryak, a revolutionary lawmaker involved in the negotiations over Yarosh’s role in the government, says the right-wing militant was in the running to become deputy prime minister overseeing the security services. “That was on the table,” Shkiryak tells TIME. After much debate, Yarosh was offered the role of deputy head of the National Security Council, but rejected it as beneath him. In his only interview with the Western press, Yarosh told TIME last month that he planned to turn Right Sector into a political party and run for office. “He could run for president,” adds Nemiriya.

Even that possibility has been enough to horrify the Russians in the east and the south, and Moscow has played on those fears to claim that Nazis are coming to power. On Saturday, when Putin asked his upper house of parliament to allow an invasion of Ukraine, the lawmakers had no trouble coming up with a justification. “What’s happening in Ukraine is a true mutiny, a plague of brown-shirts,” said one of the senators, Nikolai Ryzhkov.

In the Crimean capital of Simferopol, that logic took hold. Thousands of people marched through the streets of the city on Saturday carrying enormous Russian flags and chanting “Fascism will not pass!” Dobrynya, the organizer, said her greatest concern was the role of Right Sector in the new government. “We’re supposed to accept these radicals deciding who is going to rule Ukraine? That can’t happen. So thank God we have these wonderful guardians now,” she said, gesturing toward the battalion of Russian marines who were guarding the Crimean parliament building. In four other cities of eastern Ukraine, major demonstrations called for Russia to send similar contingents to protect them from the “fascists.” Now, with the approval of his obedient legislature, Putin seems to ready to oblige, surely comforted by the fact that cheering crowds would come out to greet the Russian tanks if they do roll over the border into eastern Ukraine. 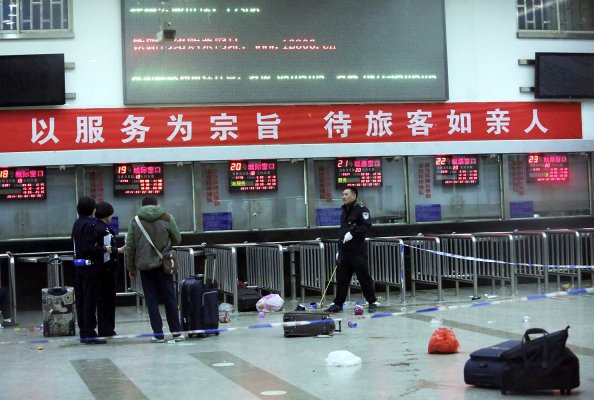