A North Korean navy ship fired two artillery shells in the vicinity of a South Korean warship in the disputed waters near Yeonpyeong island on Thursday, and the South Korean vessel fired several rounds back in response, the South Korean Defense Ministry said.

The North Korean shells landed about 200 meters from the South Korean ship, which was on a regular patrol mission according to the ministry.

The incident took place two days after South Korea fired warning shots at three North Korean ships that crossed the maritime border between the two countries in the Yellow Sea border. Pyongyang condemned the act as “gravely provocative” and said it would retaliate.

Residents on Yeonpyeong, where North Korean shelling killed four people in 2010, were reportedly evacuated to bomb shelters as the naval exchange broke out.

The rhetoric between the two countries has been intensifying, with Pyongyang dishing out an increasing number of insults at Seoul, and a spokesperson from South Korea’s defense ministry saying that the North was not a real country and “must disappear soon.”

Both sides regularly conduct artillery drills in the disputed waters, which lack a clearly marked sea boundary. Over the past two months, hundreds of shells have been fired, causing island residents to evacuate on a number of occasions. 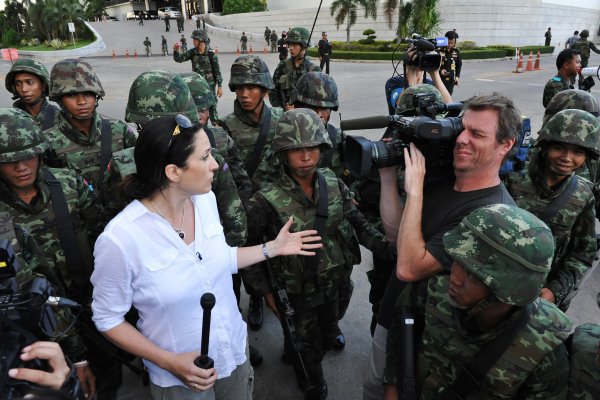 Foreign Mediation Would Stop Thailand's Vicious Cycle of Coups
Next Up: Editor's Pick