Troops in unmarked uniforms stand guard in Balaklava on the outskirts of Sevastopol, Ukraine, March 1, 2014.
Andrew Lubimov—AP
By Sam Frizell

Putin said ethnic Russians in Crimea and the personnel of a Russian military base needed to be protected for the “normalization of the political situation” in Ukraine. But the Russian president’s official request for troops seemed to be merely a formality as Moscow appeared to solidify its iron grip on Crimea.

Armed troops believed to be Russian had already seized control of much of the strategic peninsula Friday and Saturday, taking over key airports and communications centers across the region. By Saturday they had seized an airfield used for military transports, and Ukraine moved to close its airspace Saturday after reports suggested at least eight Russian troop transport planes had touched ground in the Crimea.

Meanwhile, Crimean prime minister Sergei Aksyonov called on Putin to help secure the “autonomous Republic of Crimea” and declared that armed forces, police and border guards on the peninsula were under his control, and not Ukraine’s, reports the New York Times, a moot point after pro-Russia factions have effectively seized control of much of the peninsula.

In a statement released to Russian news services, the Kremlin said it “will not ignore” requests for assistance from Aksyonov, who was voted into office in Crimea Thursday after pro-Russia gunmen seized the building.

Ukraine’s Prime Minister in Kiev, Arseny Yatsenyuk, demanded Russia withdraw any forces and respect Ukrainian sovereignty. “We call on the government and authorities of Russia to recall their forces, and to return them to their stations,” he said, according to the Interfax news agency. “Russian partners, stop provoking civil and military resistance in Ukraine.”

The U.N. Security Council planned an emergency meeting for Saturday afternoon to discuss the worsening crisis in Ukraine. Any formal action would be subject to a veto by Russia, a permanent member of the council.

The Obama administration criticized the mooted Russian intervention in strong terms on Friday afternoon. “The United States will stand with the international community in affirming there will be will be costs for any military intervention in Ukraine,” President Barack Obama said.

Crimea became part of Ukraine in 1954 after the Soviet leader Nikita Khrushchev passed the Russian-populated peninsula to Ukrainian control. The regions still has deep ties to Moscow, as well as Russian military assets.

This story was updated to include news of the U.N. Security Council emergency meeting on Saturday 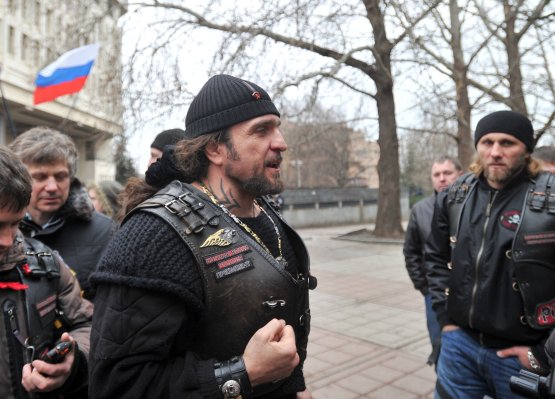 Russia Ups the Ante in Crimea by Sending in the 'Night Wolves'
Next Up: Editor's Pick