Watch Out for Missile Blowback

On the battlefield, shoulder-fired antiaircraft missiles can be exceptionally effective. Lightweight and portable, they are capable of knocking helicopters and low-flying airplanes out of the sky. Off the battlefield, they are just as dangerous. Former CIA director David Petraeus has called them “our worst nightmare.” Just one in the wrong hands, and aimed at a civilian airliner, could blow a $15 billion hole in the world economy. But in spite of the risks the missiles pose, some Syrian and American officials argue that they have a significant upside: they could turn the tide of the civil war in Syria. And that’s why the Obama Administration is debating whether to give them to Syria’s rebels.

On a mid-May visit to Washington, Ahmad Jarba, leader of Syria’s main Western-backed opposition group, pleaded directly with President Obama and other top officials to supply his fighters with the missiles, which are technically known as Man-Portable Air-Defense Systems, or Manpads. Conceding that Syrian President Bashar Assad’s regime has gained the upper hand in the country’s three-year civil conflict, which has left more than 160,000 dead, Jarba says the power to shoot down regime aircraft could be the rebels’ only hope of prevailing.

Jarba’s case impressed key members of Congress, and Secretary of State John Kerry is sympathetic. Rebel backers are hopeful that Obama will come around soon. The U.S. has recently begun sending the moderate opposition powerful new antitank weapons, and Washington is frustrated at the failure of recent peace negotiations.

But the case for giving the Syrian rebels the missiles isn’t so simple. Obama and his top advisers see more potential risk than gain. It’s hard to blame them.

At first blush, the weapons might seem an easy fix for a conflict that has vexed Obama, making him appear to some as indecisive and callous to the suffering of innocents. “The introduction of Manpads could be a game changer in Syria, like it was in Afghanistan in the 1980s with Stinger missiles,” says an official from an Arab government, referring to the way U.S.-supplied anti­aircraft missiles helped Afghan fighters drive out the Soviets.

The risks are huge, however. Islamist groups aligned with al-Qaeda have gained prominence on the opposition side. Such fighters could use lost or stolen Manpads to shoot down a civilian airliner. Terrorists tried to do just that to an Israeli jet departing from Mombasa, Kenya, in 2002. The downing of one civilian airliner, according to a 2005 Rand Corp. study, could temporarily freeze world air travel and produce some $15 billion in economic losses.

Jarba and others say the missiles would be handled only by carefully vetted rebels. But Obama officials want something more reliable, according to one senior congressional aide. They are exploring the feasibility of biometric locks, GPS tracking devices and remote “kill switches” that would render the Manpads useless outside Syria. “The Administration is thinking through this, but they’re fairly skeptical,” says the aide. “How do you do a kill switch that someone on the ground can’t undo?”

The risk would be more tempting if the case were clearer. “Manpads alone would not play a decisive role,” says Anthony Cordesman, a military analyst at the Center for Strategic and International Studies in Washington. “They would limit helicopter movement and the use of aircraft, but that might provoke the use of Syrian artillery.”

In spite of that risk, Jarba invokes a humanitarian argument for the weapons, saying they could work to counter Assad’s increasing use of “barrel bombs”—oil drums packed with explosives and metal objects like nails. The bombs are pushed out of helicopters and are primarily used to kill and maim civilians. But even if the Manpads inhibit Assad’s use of barrel bombs, Cordesman notes, the Syrian President will surely find another way to unleash hell on his people. (One suspected recent weapon: chlorine gas.)

Faced with ambiguous benefits and no rock-solid assurances, Obama isn’t likely to budge. After all, if U.S.-supplied Manpads down a civilian jet, he’ll have to answer for it. 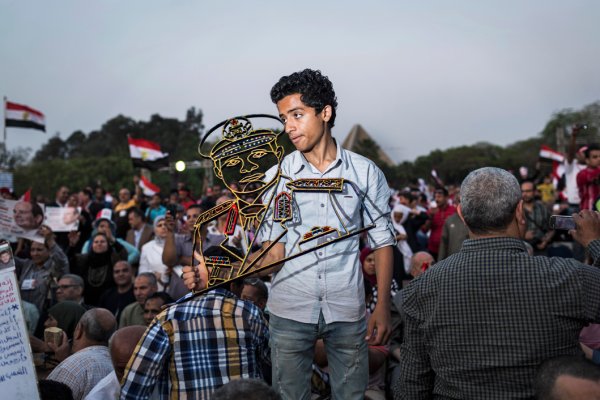 No Military Solution
Next Up: Editor's Pick