Marchers pass by the Metropolitan Detention Center during one a several May Day immigration-themed events on May 1, 2014 in Los Angeles, California.
David McNew&mdash;Getty Images
By Bill Richardson and Rosario Marin

Vice President Joe Biden told a crowd of business leaders this month that “something’s wrong with us” when America must look overseas to fill critical jobs requiring science, technology, engineering and mathematics skills.

As proud Latino Americans from opposite ends of the political spectrum, we believe policymakers must set aside partisan acrimony to fix our nation’s broken immigration system.

Independent studies have shown that comprehensive immigration reform will boost economic growth, reduce the deficit and stoke the creative fires that burn in our entrepreneurial American spirit. It’s also the right thing to do.

We have served presidents of opposing parties and have a first-hand understanding of the deep political rift in our country over this critical issue. But there is a path forward that we believe both parties are ready to travel during the 113th Congress. Voices of reason in Washington—including in the House of Representatives—are arguing it’s high time for a “grand bargain” on immigration.

First, let’s deal with the elephant in the room: it’s time to bring the 11 million undocumented immigrants out of the shadows. Both parties understand this political and moral imperative, even as they quibble over the details. Additionally, we must continue to invest in the security of our borders, even if we disagree over how best to achieve that goal.

One immediate benefit of comprehensive reform will be the much-needed transformation of our broken visa system, which places arbitrary caps on the number of foreign workers invited to help grow our economy and keep the U.S. globally competitive.

Both parties agree there aren’t enough U.S.-born workers with the requisite science and technology skills to meet the needs of today’s information economy. While policymakers pursue education reform to close this enduring knowledge gap, our immigration system is preventing the best and brightest international talent from filling demand, making the U.S. less competitive today.

We need to look no further than last month’s filing season for temporary skilled worker visas to understand why this issue is crucial: the government received 172,500 H-1B visa applications in just five days, more than double the 85,000 annual cap under current law.

Last June, the Senate passed a broad immigration reform bill that contains many of the right policies, including an increase in the H-1B visa cap. But their effort to reform the H-1B visa process was marred by the inclusion of anti-competitive language.

What is wrong with the Senate bill? The Senate language discriminates against employers with higher proportions of H-1B workers, unfairly targeting many companies in the information technology (IT) services market, which relies on a global talent pool. It forces major U.S. companies who rely on IT service providers, including most of the Fortune 500, to take one of three actions: bring their IT work in-house, if they actually find enough qualified talent; move the work offshore, which some American businesses have said they are already preparing for; or choose from a shrunken pool of IT providers that escape the arbitrary restrictions. All three options will reduce competition, raise prices and disrupt essential technical support in sectors ranging from financial services to life sciences.

The House Judiciary Committee has offered a smarter path forward, maximizing the competitive value of H-1B reform to the U.S. economy. The House bill would boost the annual cap on temporary H-1B visas for skilled workers from 85,000 to 195,000, including setting aside up to 40,000 visas for individuals with advanced degrees in science, technology, engineering and mathematics fields. The House language keeps the H-1B process open and competitive for all companies, raising all boats.

As policymakers move toward an eventual compromise in conference, they must reject harmful Senate-passed restrictions on who can actually use these visas, which would hinder U.S. competitiveness.

At the same time, policymakers should adopt measures the Senate bill got right, including an expansion of the 140,000 annual green card cap for skilled workers, which includes an exemption for advanced science and technology degree-holders from U.S. universities, as well as cap exemptions for the families of workers admitted to the U.S. on permanent visas. The Senate bill rightly recaptures unused visas from prior years, which would eliminate the backlog of those waiting to receive green cards.

According to the American Immigration Lawyers Association, international skilled workers “often tire of waiting, and leave the U.S. entirely to put their knowledge and skills to use in other countries eager to compete with and surpass the U.S.” Global rivals such as Canada have made no secret of their willingness to welcome those turned away by the broken U.S. visa system. Brain drain aggravates our skills gap.

The House and Senate need to work out their differences in the normal give and take of the legislative process – the way Americans expect Washington to operate. For the sake of U.S. businesses, talented international workers and the 11 million undocumented living in the shadows, let’s roll up our sleeves and get to work. American competitiveness can no longer afford to wait.

Bill Richardson is the former U.S. Energy Secretary, Governor of New Mexico and UN Ambassador. Rosario Marin served as the 41st Treasurer of the United States. They serve as co-chairs of the American Competitiveness Alliance. 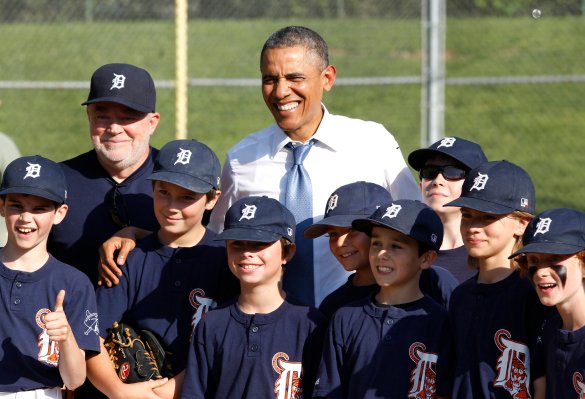 That Time Obama Showed Up At My Little League Game
Next Up: Editor's Pick