Inside Hillary Clinton’s Quest to ‘Be Real’

An adviser wanted then-First Lady Hillary Clinton to go on the kitschy ’90s TV show Home Improvement because it would present her “in a very likeable light.” With the Internet years away from being the force in politics it is today, staffers toyed with the idea that she could have fun in the new medium and “could speak to young women through Internet.” They kept a running list of which reporters traveling her were “aggressive,” and who could be counted on as a “Hillary fan.”

And as Clinton prepared to formally launch her campaign to represent New York in the U.S. Senate, Democratic media guru and Clinton confidante Mandy Grunwald gave Clinton some advice that spoke to just how hard she was trying to connect.

“Be very careful to ‘be real,'” Grunwald wrote to Clinton in a memo in 1999, the year after the Monica Lewinsky scandal engulfed the Clinton White House.

These revelations, contained within thousands of pages of documents released by Bill Clinton‘s presidential library on Friday, hardly upend the public perception of Hillary Clinton, already long seen as a careful political operator, from her days as a first lady and senator through her tenure as Secretary of State under President Barack Obama. But with all eyes on Clinton ahead of a possible 2016 presidential run, they add rare new bits of new detail to a public persona that is among the most defined in America.

Well before her first political campaign as the actual candidate, Clinton and the people around her were grappling with how to make her more appealing in the eyes of the public. In August of 1995, her press secretary Lisa Caputo wrote to chief of staff Maggie Williams, excited about the prospect of getting the first lady a cameo on Home Improvement.

“Home Improvement is the most popular television show on the air,” Caputo wrote. “They are willing to do a show on women, children and [family] issues or a show on whatever issues Hillary would like. The outreach would be enormous and it would present Hillary in a very likeable light I believe. Although I have some concerns that it diminishes the role of First Lady by going on a tv sitcom!, it is probably worth weighing it against what we believe we might be able to gain by such·an appearance politically and image-wise.”

In the same memo, outlining possibilities for media outreach by Clinton, Caputo eyed the burgeoning World Wide Web as a way for the first lady to connect.

“Hillary could speak to young women through Internet,” she wrote. “I think Hullary would have fun with this and I believe it would not be too difficult to organize. We could invite women’s media (i.e. the women’s magazines) in to watch her do such an event. It would make for a nice story in a women’s magazine.”

By the time Clinton was gearing up for her Senate run, aides were advising her to come across as less packaged—a criticism that became all too familiar after her failed 2008 presidential run, when she ended up downing shots of Crown Royal amid gripes that she came off as inauthentic. Take control of an interview and be an expansive in answering, Grunwald told Clinton.

“You have a tendency to answer just the question asked,” she wrote in the 1999 memo. “That’s good manners, but bad politics. Take every opportunity you can to shift your response to an area you want to talk about and then be really expansive on that part of the answer You did this well in the [Dan] Rather interview where you acknowledged that of course last year was rough. Once you agree with the audience’s/reporters’ reality like that, it gives you a lot of latitude to then say whatever you want. 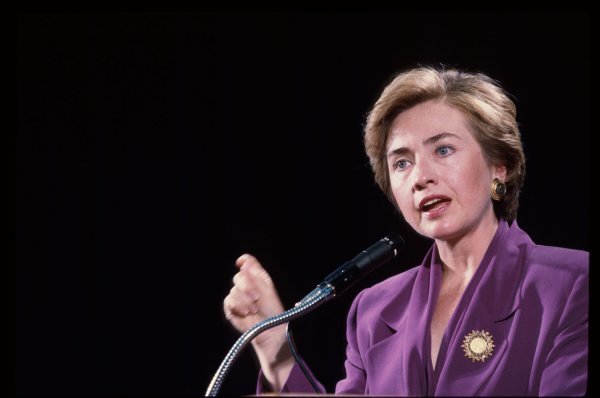 Hillary Clinton Tried to Calm Democrats at Key Moment for Health Reform
Next Up: Editor's Pick