How Being Good Parents Can Make You a Lousy Couple

Twenty-two years into our marriage, my husband and I hit a rough patch. There were no knockdown, drag-out fights; it was more of a slow withering.

When it started, or how long it had gone on before we noticed, neither of us could say. We just looked up one day and realized that our solid, happy, even enviable marriage was in trouble.

Like countless long-married couples before us, we had somehow let our day-to-day routine—managing the business and boredom of running our household; juggling careers; parenting two kids with their own over-scheduled lives—suck us dry. With our son and daughter, we were still a great family, a great four. As a husband and wife, we’d become a lousy pair.

I was recently reminded of all this—of the pain and sadness that came with recognizing that we’d fallen into such a hole, and the pleasure and happiness that have come from climbing back out again—after reading Love Illuminated, the new book by Daniel Jones.

After 10 years as the editor of the popular New York Times column “Modern Love,” and sifting through some 50,000 submissions, Jones says that two questions about the vagaries of love surface most often: “First, from the young: ‘How do I find love?’ And second, from those struggling through the marital malaise of midlife: ‘How do I get it back?’”

He suggests that there are really only three choices for long-married parents who don’t what to see their unions end in divorce: quashing, sneaking or restoring.

Quashing one’s desires, he says, is for those who’ve decided to accept their marriage for what it is, though he allows that this “runs the gamut from the bitterly resigned to the appreciatively so.” And while Jones shows little tolerance for those on the bitter end of the spectrum, he deems the “appreciatively resigned . . . among the healthiest and happiest married people alive.”

It is, however, with Jones’ third option, the restorers—the category in which my husband and I undoubtedly belong—that I take issue.

While nipple clamps and eye patches were not our thing (or required kisses or scheduled sex or mandatory fresh flowers, for that matter), we were lost and eager to find our way back to each other. We sought counseling as a way to begin the process and were grateful to have the seasoned guidance of someone who could help show us the way.

We took long afternoon hikes in the canyons—in fact, we still do—and made time to go out for dinner, just the two of us, rather than our usual Saturday night out with friends. Instead of always splitting chores, we made a point of doing some of them together, like shopping at the Sunday morning farmers market or taking the dog for a long evening walk.

For us, these have not been merely check-the-box activities but, rather, a conscious effort to reconnect and remember why we were drawn together in the first place.

Like many couples after they’ve had children, we’d found ourselves spending less and less time together. Some of this was practical, a matter of convenience—one of us running our son to basketball practice while the other took our daughter to a friend’s. By the time we’d gotten done with our respective household tasks, we’d often vie for a little “me” time—a trip to the gym for my husband or a quiet spell with a book for me. At that point, conversations had a way of feeling like interruptions.

It wasn’t “work” that our marriage needed so much as attention, and we made a pointed decision to tend to it, to care for it, to nurture it back to health and keep it healthy.

Alone time doesn’t guarantee a great marriage. But, according to a 2012 study from the National Marriage Project at the University of Virginia, couples who spend more one-on-one time together are less prone to divorce and report higher levels of sexual satisfaction, communication and commitment. “Husbands and wives who engaged in couple time with their mates at least once a week were approximately 3.5 times more likely to report being ‘very happy’ in their marriages,” the study added.

I am not so naïve as to misunderstand why Jones celebrates the “appreciatively resigned.” Sometimes, it’s tempting to feel like “good enough” in a long marriage is actually pretty great. But I believe that deliberately not settling, and actively wanting more from each other and from one’s marriage, is what keeps it truly great.

At the beginning and end of his book, Jones asks a seemingly simple question: “Is love a feeling or a choice?” My answer is that it’s both.

Love is the heart-stopping, passionate, adrenalin-producing feeling that makes people want to rip off each other’s clothes when they first meet. But nearly a quarter of a century in—and two kids and a mortgage later—it’s clear to me that love is also a choice you have to make every single day. 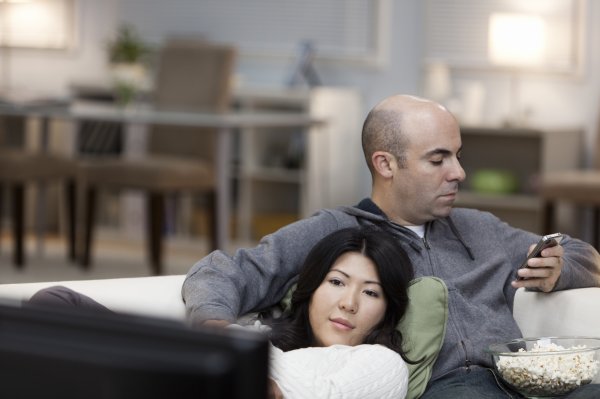 What Men Share on Social Media But Not With You
Next Up: Editor's Pick