One of CEOs' Most Powerful Tools Is Starting to Look Dull

A lot has been made in recent years of the record amount of corporate cash on the balance sheets–around $2 trillion in U.S., and the same amount in firms’ bank accounts abroad–as well as the fact that companies aren’t spending it. But the latter isn’t totally true. Firms have shelled out some cash, just not by investing in factories or equipment or new workers. They’ve done it with share buybacks, which involves a firm buying back its own shares on the open market. This almost inevitably raises a company’s share price, thus enriching existing shareholders.

Many companies see this as a more flexible way of returning cash to shareholders than giving out dividends, because they don’t have to set and meet specific dividend targets but can just buyback shares as and when they like. But some critics say that it’s just a way to make the rich richer, without actually putting a firm’s capital to use creating jobs and growth in some more sustainable way. Either way, it’s been one of the major trends in the market in the last five years. As I’ve written in many stories, including this cover profile of Carl Icahn, the volume of share buybacks in the US has been at record levels in recent years. Indeed, the total volume of buybacks in the first quarter of this year amongst S&P companies was higher than it’s been since the third quarter of 2007, before the subprime crisis really got going.

Now, that’s changing. As a new report by London-based Capital Economics points out, share buybacks have begun to slow just a little bit. Having risen by more than the broader market in each of the last five years, the S & P 500 Buyback Index has risen by less than that so far in 2014. To understand what that might mean for the markets, you have to understand what the history of share buyback data actually tells us.

The most interesting research on this topic has been done by William Lazonick, a professor at the University of Massachusetts, whom I’ve written about in the past. His data show that while firms may want you to think that buybacks are a vote of confidence in their own stock, buybacks are typically done not during bear markets in which stocks are undervalued, but during bull markets, particularly end bull markets, when companies are trying to ride a wave of price increases that have little to do with fundamentals. Indeed, Lazonick shows that while buybacks provide a short-term sugar hit, they tend to go hand in hand with lower margins and growth prospects over the longer term (paging Apple and Yahoo). That may be because if you look at four decades of data, buybacks tend to increase at the same time that spending on research and development is falling. In short, companies pay out their seed corn to investors, rather than re-investing in themselves by developing new businesses, hiring or retraining workers, building new factories, etc., etc.

I think the fact buybacks are now slowing could foreshadow a larger market slowdown, or even a broader correction in stocks (the Capital folks agree). We’ve already seen a correction, of course, in very over valued areas like technology and certain emerging markets. And the fact that the big blue chips are finally starting to buy back less of their own stock could indicate that they see a slowdown coming, too.

Ultimately, the valuation of stocks reflects the future earning potential of companies. While there are lot of things in the economic environment right now that are good for companies–interest rates are still low, the U.S. economy is improving–I keep thinking about the fact that people having gotten a raise in five years. As long as wages stay flat, and spending is relatively constrained, it’s hard to imagine the market staying this high forever. The slowing of share buybacks may turn out to be the canary in that particular coal mine. 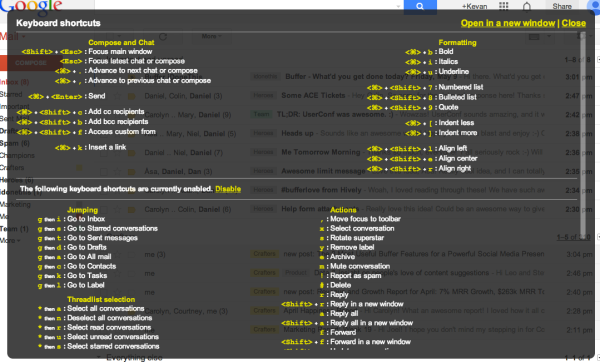 111+ Keyboard Shortcuts for Your Most-Used Online Tools
Next Up: Editor's Pick