A Regional Express Train, or TER, is sationed along a platform at the Saint Lazare station in Paris, Wednesday May 21, 2014.
Remy de la Mauviniere / AP
By Olivia B. Waxman

Stop fat-shaming the American version of Godzilla because it turns out the French are dealing with a more serious size problem.

The Associated Press reports that 341 new trains intended to be rolled out over the next two years are too wide for the platforms in nearly 1,300 stations because railway network engineers “forgot to go and measure the actual distance between lines and platforms.”

It will cost $68 million to correct the error. The whole debacle brings to mind other notable engineering mistakes throughout history, such as:

The Bridge That Made People Seasick: When the Millennium Bridge over London’s Thames River first opened in 2000, it swayed so much that pedestrians would get dizzy and fall down. It reopened in 2002 after undergoing an $8-million repair, and some experts blame the synchronization of people’s footsteps to the movement of the bridge for the wobbliness.

The Bridge That Collapsed Because of Wind: In Tacoma, Washington, a moderate windstorm caused the Tacoma Narrows Bridge to collapse in 1940. The disaster, which many call “the most dramatic failure in bridge engineering,” prompted civil engineers to focus more on safeguarding suspension bridges against the aerodynamic effects of wind. It was rebuilt in 195o.

The Design Flaw in a Famous Skyscraper: Stilts make up the first nine stories of the Citicorp Center in Midtown Manhattan, which opened in 1977. One year later, an undergraduate architecture student studying the skyscraper wrote its chief structural engineer William LeMessurier to say the design is vulnerable to winds that strike at building corners. LeMessurier secretly worked with New York City emergency personnel to plot a wind evacuation plan for the building.

The Overweight Sub That Cost Billions: After Spain invested $2.7 billion in a program for diesel-electric submarines, it was discovered last year that the first one — weighing 2,200-tons — was 70 tons overweight and would probably sink if it went out to sea. The error occurred because a decimal point was put in the wrong place.

Square Airplane Windows: Two of the first passenger jet airliners broke apart mid-air in 1954 because of “metal fatigue” — cracks in the edges of square windows that caused the planes to explode. Aircrafts had to be redesigned with rounded windows.

The Sinking Airport: The Kansai International Airport on an artificial island off the bay of Osaka, Japan, has been known to have a sinking problem because it sits atop a seabed of soft sand.

The Airport with Computerized Baggage-Handling: In 2005, United Airlines announced it would end its one-of-a-kind computerized system for transporting baggage at Denver International Airport. Maintenance cost $1 million annually, and after a decade, it still couldn’t handle sharp corners and had been known for delivering bags to the wrong places, chewing them up and flinging them into the air. 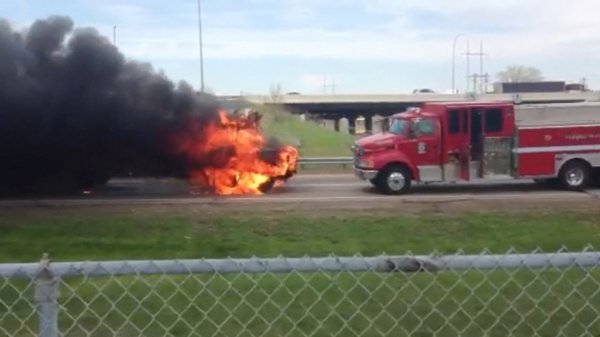 Watch a Flaming School Bus Just Miss a Firetruck
Next Up: Editor's Pick