Rescuers are still digging for victims of the two car bombs that killed at least 118 in the central Nigerian city of Jos on Tuesday.

No group has yet claimed responsibility for the gruesome attack, but President Goodluck Jonathan indicated he blamed the militant Islamists Boko Haram, which has killed more than 1,000 people this year, and which kidnapped more than 250 schoolgirls last month.

Tuesday’s blasts ripped through a crowded business district about half an hour apart, suggesting that they were coordinated to cause as much carnage as possible. Witnesses describe a chaotic scene suffused with the sickening smell of human flesh, with dozens of bodies strewn about, many of them emergency workers who had just arrived in response of the first explosion.

Jos sits on a fault line between Muslims and Christians, nomads and farmers, and has previously erupted in violence, most notably when several churches were bombed on Christmas Day in 2011.

Some Nigerians are blaming the government for not doing enough to prevent the latest attacks from happening.

Mark Lipdo of the Christian charity Stefanos Foundation told the Associated Press that several people had reported their suspicions about the white van that contained the first bomb, since it was parked for hours in the market place. However, authorities apparently took no action. Lipdo also says they ignored a warning issued by a man arrested with explosives strapped to his body on Saturday.

President Jonathan, who is facing increased pressure over the recent escalation of terrorist attacks, called the perpetrators “cruel and evil” and said that “this administration will not be cowed by the atrocities of enemies of human progress and civilization.”

The Jos bombings, and a separate car bomb in northern Kano that killed 24 people on Monday, took place after regional and Western leaders pledged a “total war” on the Boko Haram at a weekend summit in Paris. The latest attacks also coincide with parliament’s approval of an extension of emergency laws in three of the country’s restive north-eastern states for another six months. 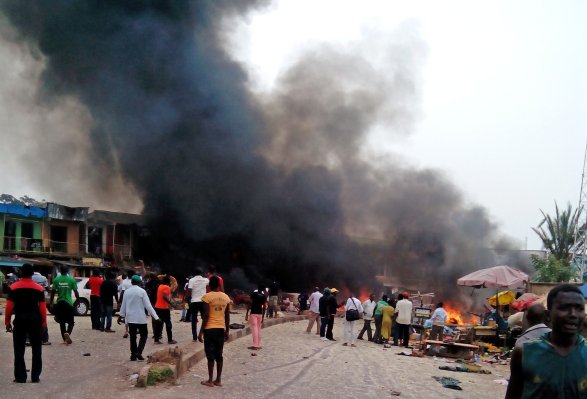 Nigeria Car Blasts Kill Over 100
Next Up: Editor's Pick