Thai army chief General Prayuth Chan-ocha arrives to give a news conference at the Army Club in Bangkok on May 20, 2014
Athit Perawongmetha—Reuters
By Charlie Campbell

Following Tuesday’s declaration of martial law, Thai army chief General Prayuth Chan-ocha called a meeting of key government and opposition figures Wednesday to help end the political deadlock that has crippled the nation for almost six months. He promised that peace “will be quickly restored.”

Calm prevailed in Bangkok, where gun-toting soldiers fanned out across the steamy capital and tourists enjoyed souvenir selfies atop military jeeps. Protests were allowed to continue, but were confined to well-defined areas.

However, the sudden imposition of draconian media censorship, the curbing of civil liberties and the lack of an exit timetable have led to accusations of a “de facto coup.”

“The military has pulled a 100-year-old law off the shelf that makes the civilian administration subordinate to the military, effectively rendering the executive, legislative and judicial branches powerless,” said Brad Adams, Asia director for Human Rights Watch.

There is little doubt the military is now in charge. When asked if the army was maintaining contact with the government, the notoriously gruff Prayuth answered: “Where is the government right now? Where are they now? I don’t know.”

More than a dozen television channels have been taken off the air and social-media users threatened with harsh punishments for posting comments that “incite conflict and violence.”

Prayuth’s sudden intervention — which came as a surprise to the caretaker government, police force and other uniformed branches — took place after six months of street protests claimed at least 25 lives and left 700 wounded. The unrest has brought Southeast Asia’s second largest economy to the brink of recession amid portents of civil war.

Thailand’s long-running political crisis was aggravated on May 7, when Prime Minister Yingluck Shinawatra was forced from office by the nation’s Constitutional Court on charges of nepotism and abuse of power. Nine members of her cabinet were also sacked.

Yellow Shirt antigovernment protesters are demanding legal reforms to neuter Yingluck’s politically powerful family before any new polls are held, but the suggestion is anathema to her Red Shirt supporters, who are also currently camped out in the capital. And as Thailand’s powerful military has traditionally been aligned with the anti-Shinawatra political establishment, many Red Shirts are seething at the latest developments.

“They want to destroy the democratic system. The want to destroy some articles of the constitution [that govern elections], and no matter who does that it is the same as a coup d’état,” prominent Red Shirt leader Weng Tojirakarn tells TIME.

Caretaker Prime Minister Niwatthamrong Boonsongpaisan emphasized the need for expedited elections. “The government has sent a letter to the Election Commission suggesting that it organize an election on Aug. 3, which we think is suitable,” he told reporters.

Academics also have reservations about the military’s intervention. The Khana Nitirat (Enlightened Jurists), a group of seven law lecturers at the prestigious Thammasat University outside Bangkok, published a four-point explanation of why martial law was “unconstitutional and illegal.”

Meanwhile, the U.S. State Department has refused to say if a coup has taken place. Any such admission would automatically trigger sanctions against a strategic defense partner. (Such measures were introduced in 2006 after Yingluck’s divisive brother, Thaksin Shinawatra, was toppled in Thailand’s 11th putsch since the end of monarchial rule in 1932.)

“As you may know, martial law, the declaration of that, is allowed for in the Thai constitution,” State Department spokeswoman Jen Psaki told a press briefing Tuesday. “But we’re certainly closely watching what’s happening on the ground, and we’ll continue to make evaluations of what’s happening.” 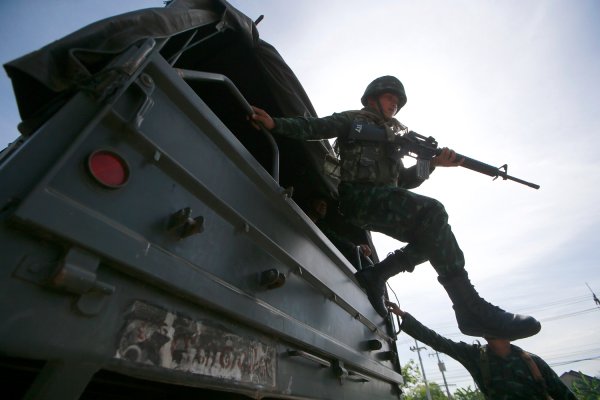 Coups That Helped Shape the Land of Coups
Next Up: Editor's Pick