Japan's Prime Minister Shinzo Abe delivers a speech during a press conference at his official residence in Tokyo on May 15, 2014
Kazuhiro Nogi—AFP/Getty Images
By Kirk Spitzer / Tokyo

Against the backdrop of violent clashes between Chinese and Vietnamese patrol ships in the South China Sea last week, Japanese Prime Minister Shinzo Abe announced plans to change the interpretation of the country’s pacifist constitution to allow Japan’s armed forces to engage in “collective self-defense.”

That means Japan’s potent but currently low-profile military would be allowed to fight alongside the U.S. or other friendly forces — even if Japanese troops or territory do not come under direct attack first.

In a live, televised speech, Abe made a direct connection between the Sino-Vietnamese skirmishes and the tense standoff over the Senkaku Islands in the East China Sea. The outcrops are claimed by both Japan and China, which refers to them as the Diaoyu Islands.

“In the South China Sea, as we speak, conflict among nations continues as a unilateral action against the backdrop of force and coercion,” Abe said. “This is not a fire on the other side of the shore of the river. In the East China Sea, the Japan Coast Guard [and] the self-defense forces — under high tension, on a 24-hour, around-the-clock basis — are engaging in patrol activities [against] intrusions in Japanese territorial waters.”

Abe says the new constitutional interpretation is necessary to strengthen the U.S.-Japan security alliance and deal with an increasingly hostile security environment in Asia.

Easing restraints on Japan’s military and instilling a sense of “patriotism” among the Japanese has long been a goal of Abe and his conservative, if not nationalist, supporters.

“What Abe is saying is that to play the global role that is expected of Japan, given its size and its capacity, they should be able to assist the international community in certain situations where peace and stability are in danger and in joining the defense of other countries. This is something the Americans have been asking Japan to do for decades,” says Brad Glosserman, executive director of the Pacific Forum CSIS in Honolulu.

When the new policy will go into effect is still unclear. Although a national referendum is not required — as it would be if Abe had proposed changing the constitution itself — the Diet will have to amend laws regulating the self-defense forces, peacekeeping operations and related issues.

That may not be easy. Opinion polls show that roughly half the population is opposed to the new interpretation. Article 9, the foundation of Japan’s 70-year commitment to pacifism, expressly renounces “war as a sovereign right of the nation and the threat or use of force as means of settling international disputes.”

Although Abe’s ruling coalition holds a solid majority in both houses of the Diet, even some members of his Liberal Democratic Party have expressed reservations about the change. Debate on the issue began on Tuesday, though a final resolution is not expected until later in the year.

“People are worried about three major things: the risk that this revision will lead to the Japan Self-Defense Force being more actively engaged in overseas military operations, that this will lead to Japan’s policies under Abe being increasingly militarized and assertive, and that this will be the first step toward a new Article 9, which would not only dilute but destroy Japan’s image as a country of peace,” says Garren Mulloy, an associate professor of international relations at Tokyo’s Daito Bunka University and author of a forthcoming book on Japan’s postwar military and security.

Abe insisted during his speech last week that Japan remains committed to peace and that the new policy — issued in the form of recommendations from an advisory panel — would not be the first step on the road to remilitarization.

While Japan’s right to defend itself independently from attack would not change, “collective self-defense” would be invoked only under a specific set of conditions and only after careful deliberations by the Cabinet, Abe said.

According to panel recommendations, “collective self-defense” would be invoked only when requested by a foreign country “in close relationship with Japan” and would involve “minimum necessary” use of force.

Abe said Japan would not be dragged into American-led multinational operations like the wars in Iraq and Afghanistan, although he was not clear in how distinctions would be made.

Unsurprisingly, the new policy was viewed with suspicion by some of Japan’s neighbors.

“China, as well as the Republic of Korea, have been critical and vigilant about this for a long time. Abe’s stance on such issues as Japan’s role during World War II and comfort-women issues make most of the people in these two countries more doubtful about the reinterpretation of Japan’s right of collective self-defense,” says Tiejun Yu, assistant president at the Institute of International and Strategic Studies at Peking University in Beijing.

Not to worry – Japan will not be dispatching troops at every opportunity, counters Kuni Miyake, research director for foreign affairs and national security at the Canon Institute for Global Studies in Tokyo.

“Collective self-defense is a right — it’s not on obligation. The government will make decisions based on each situation. We have to show that we can behave — that under our democracy, we can control ourselves and that we have self-discipline and restraint,” Miyake says.

But what if the standoff in the South China Sea were to escalate and Vietnam were to ask for Japan’s help in defending its interests from China? Would Japan invoke the right of collective self-defense and come to Vietnam’s aid?

“I think it’s unlikely. There are many, many ifs involved,” Miyake says. “But, I would not completely rule it out.” 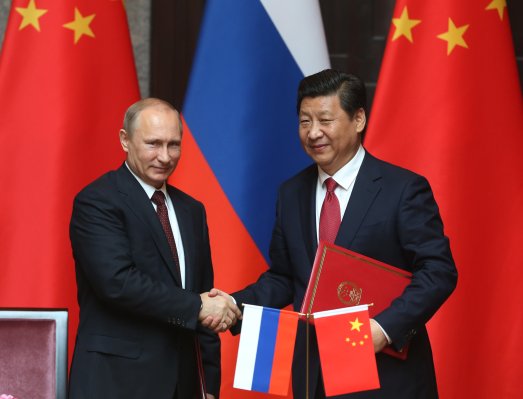 Why Russia's Putin and China's Xi Want to Be Best Buddies
Next Up: Editor's Pick