Microsoft Finds Laptop-Tablet Balance with Surface Pro 3, but Windows Is Another Story

When Microsoft’s Panos Panay said on Tuesday that the Surface Pro 3 was three years in the making, I believed it.

This seems like the hybrid computer Microsoft has always wanted to build–one that’s thin and light enough to pass as a tablet but powerful enough to work like a laptop, and with a flexible enough design to blur the lines between device types. I’m already trying to figure out how to dump my Surface Pro 2 and upgrade to the Pro 3 when it arrives on June 20.

I only wish I was feeling more confident about Windows 8.1, the operating system that ships with the Surface Pro 3. More than ever, Windows 8.1 doesn’t feel like it’s meant for hybrid devices. Instead, the trend is toward accommodating tablets on one hand, and traditional laptops and desktops on the other, while the middle ground of devices like the Surface becomes muddled.

Much of this conflict stems from the “Windows 8.1 Update” that Microsoft shipped in April. To make the new Windows more accommodating to laptop and desktop users, Microsoft added new mouse-centric controls, such as the ability to close Windows Store apps with an “X” button on the top-right corner, and to launch these apps from the desktop taskbar.

If you’re using a regular laptop, these changes make sense. The classic Windows behavior is to switch between programs through the taskbar and click “X” to shut them down. In theory, extending those capabilities to Windows Store apps will help users feel more at home, so they can move beyond their stodgy old desktop software.

Unfortunately, this behavior is at odds with Microsoft’s original vision for Windows 8, in which you mainly use the new Start screen and recent apps bar to move between programs, and only fall back to the desktop for legacy software. If you actually use Windows 8.1 that way–as I do–and Windows Store apps are enabled on the taskbar, you pay the price for neglecting the desktop:

Having Windows Store apps on the taskbar only works if you’re actively closing things down when you’re finished. Otherwise, the clutter of unclosed apps accumulates when you stay away from the desktop for too long. That’s not how tablet usage is supposed to work; you should be able to just move between apps without thinking about whether they’re “open” or “closed.”

Windows 8.1 offers a half-baked solution: You can just disable Windows Store apps on the taskbar. But this in itself is a point of confusion for hybrid devices like the Surface Pro 3. Users now have to decide which type of behavior–actively closing windows on the desktop or staying within the modern interface–is the right one. As I’ve said before, it’s a cognitive burden that I’d rather not deal with.

And it’s only going to get worse. In April, Microsoft revealed that it will bring back a pop-up Start menu in Windows, and will also allow modern apps to run in windows mode on the desktop. This is great news for laptop and desktop users who don’t want to deal with an unfamiliar interface, but it presents even more confusion for hybrids like the Surface Pro 3. If you have a device that can function like either a laptop or a tablet, should you use the Start screen or the old-school Start menu? Should apps open in windows, or a tablet-friendly full-screen view? Microsoft could just let users decide, as it has done with the taskbar in Windows 8.1, but what happens if they want to switch back and forth between modes? Again, it’s more confusion, more complications.

There aren’t any easy answers here, but part of me hopes Microsoft will draw a clearer line between touch and non-touch versions of Windows. The desktop should still exist in both versions, if only as way to run programs that aren’t part of the Windows Store (including, for now, Microsoft Office). But the touch version of the desktop should make a greater effort to slim down, removing options and settings that are already available on the modern side. I wouldn’t even mind if Windows Explorer went away, provided there was a way to drag and drop files between Windows Store apps.

As we saw today, Microsoft clearly has a vision for hybrid hardware, and even presented software to match, including a touch-optimized version of Photoshop and a New York Times crossword app that works with pen input. All we need now is a better hybrid operating system to hold it all together. 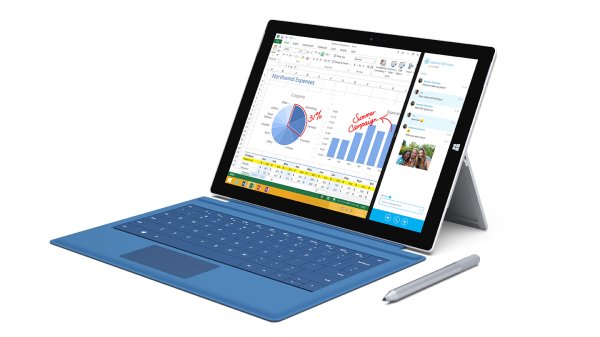 Microsoft's New Surface Wants to Kill Your Laptop
Next Up: Editor's Pick