It’s interesting that the director of the richest oeuvre of black films in the history of the medium doesn’t understand what the Civil Rights revolution was for. In his expletive-laced comments about the gentrification of Fort Greene during an interview at the Pratt Institute, Spike Lee seemed to think that what we Overcame for was to be grouchy bigots.

Basically, black people are getting paid more money than they’ve ever seen in their lives for their houses, and a once sketchy neighborhood is now quiet and pleasant. And this is a bad thing… why?

Lee seems to think it’s somehow an injustice whenever black people pick up stakes. But I doubt many of the blacks now set to pass fat inheritances on to their kids feel that way. This is not the old story of poor blacks being pushed out of neighborhoods razed down for highway construction. Lee isn’t making sense.

“Respect the culture” when you move in, Lee growls. But again, he isn’t making sense. We can be quite sure that if whites “respected” the culture by trying to participate in it, Lee would be one of the first in line to call it “appropriation.” So, no whites better open up barbecue joints or spoken word cafes or try to be rappers. Yet if whites walk on by the culture in “respectful” silence, then the word on the street becomes that they want to keep blacks at a distance.

In his interview with Anderson Cooper on Wednesday to clarify, Lee mentioned the controversy in Harlem some years ago over park drumming, which new white residents protested. Lee thinks whites were supposed to put up with being woken up on weekend mornings by the drums. That was a subtle issue. I refer to it in my Western Civilization class as a difficult judgment — the kind that shows that real life offers few easy answers.

Lee seems to think it was an open-and-shut case – but then how would he feel if it were whites drumming and blacks moving into the neighborhood and complaining? Maybe he thinks blacks are supposed to be accommodated as payback for the past. But for how long? Pity is not respect. W.E.B. DuBois once said that “Black America needs justice and is given charity.”

But on gentrification Lee doesn’t have time for making sense or trying to, despite the nuance he so brilliantly displays in his films. His comments are instead a tantrum, and an ugly one. What’s really bothering Lee is that he doesn’t like seeing his old neighborhood full of white people.

Or whitey, perhaps. Just as “thug” is a new way of saying the N-word in polite society, Lee’s “m—–f—– hipster” epithet for the new whites of Fort Greene is a sneaky way of saying “honkey.” Lee is less a social analyst than a reincarnation of George Jefferson with his open hostility to whites.

But George had grown up in Jim Crow America. We let his bigotry pass as “cute” because it was just desserts for a nasty past that was barely even past. But it’s been 40 years.

Surely what bothers Lee is not that Fort Greene is now a cushy neighborhood. He just wishes it had gotten that way with all black faces. He’s yearning for the multi-class black communities that people of his generation regret the dissolutions of after the end of institutionalized segregation (when black people like my parents, for example, moved out to mixed or white neighborhoods).

But let’s face it: The reason there were black communities like that was because of segregation. If there still were black communities like that, no matter how beautiful they would look when shot lovingly in films like Lee’s, it would signify racial barriers. The neighborhood would be prime fodder for people like Lee to intone with smug indignation about how non-post-racial America is. “You barely see a white face on the streets. What’s that about? What are they afraid of?”

When racial barriers come down, people mingle, cohabitate, and mate. People grumbling on the sidelines about the losses and appropriations and whatnot that this involves are historical detritus. That becomes ringingly clear in how impossible it is to scorn the multiracial children who grow from processes like this, who grow up to be perfectly normal adults — and life goes on.

And black will go on — but hopefully not the way people like Lee would prefer. There are those who think recreational contrarianism is the soul of blackness — surely, if we aren’t mad, we aren’t truly black.

But history records no human group whose core essence was eternal indignation. Lee’s films, ironically, teach much about what black is and what it will be. Odd that in real life he thinks hearkening back to the social politics of Fred Sanford is moving on up. 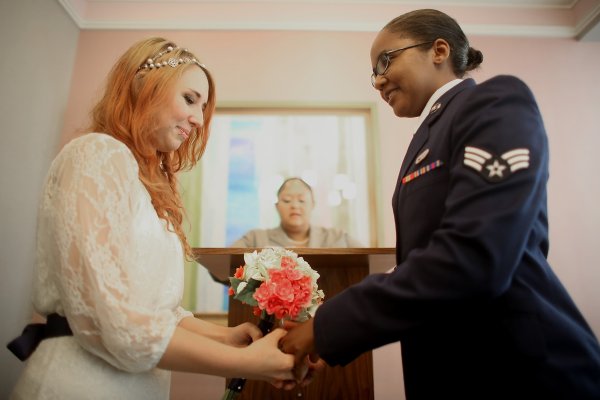 America on Same-Sex Marriage: 10 Takeaways From a New Report
Next Up: Editor's Pick