New Jersey Gov. Chris Christie moved Tuesday to cut more than $2 billion in state pension payments, which would cover a budgetary shortfall but is also sure to spark a political backlash.

The likely 2016 Republican presidential candidate cited the state constitution’s requirement to have a balanced budget for his decision to cut pension payments for inactive state employees. It would help close an estimated $807 million deficit in the current fiscal year, brought on by revenues that fell short of expectations. Christie said Tuesday he was caught off guard by how quickly he was again forced to confront the state’s burgeoning liabilities, blaming the state’s budget gap on overly-optimistic revenue projections by his budget economists and changes in federal tax law. He also criticized his Democratic and Republican predecessors for failing to make necessary pension payments. “We will not make the payments that apply to the sins of the past,” Christie said at a news conference.

The state will still make more than $1.3 billion in pension payments for those active in the system over the next 14 months, Christie said. He said he would present the legislature with a plan to reform pensions and benefits in the next month, and called on lawmakers to work with him to make additional changes. Christie’s decision exacerbates the burden on a stressed system, with the state putting its total unfunded pension liability at $52 billion, and calls into question one of his crowning achievements: a bipartisan 2011 pension and health care overhaul that helped propel him onto the national stage. The move comes after Christie changed the state’s pension formula earlier this year to save $900 million through the end of his term.

And it risked undercutting his political brand as a no-nonsense problem solver, a brand already hurt by the traffic scandal that put his White House hopes in peril.

“Maybe the folks in Washington, D.C. should tune in their TVs right now to see how it’s done,” Christie said last year when he handily won reelection by touting his record on reforming pensions and benefits. But Christie conceded Tuesday that the effort hasn’t made “much of a dent.”

“We’re still digging out of problems two decades in the making,” he said.

Under the 2011 agreement, Christie raised the retirement age for state employees and increased the rate at which they have to contribute to their pension and healthcare, while devoting additional resources to paying down the state’s unfunded liabilities. Indeed it was in defending the agreement that Christie first became a household name, as he bluntly debated critics in town hall meetings that quickly became YouTube fodder.

The announcement Tuesday reflected a scaling back of those plans. It came on the heels of another round of credit downgrades for New Jersey, with Moody’s Investors Service lowering the state’s rating from last week, following similar actions by Standard & Poor’s and Fitch Ratings. Those downgrades put New Jersey’s debt in the same troubled category as California and Illinois.

“The downgrade… reflects the weakened financial position resulting from recurring revenue shortfalls and ongoing reliance on non-recurring resources that have deferred structural imbalances into future years,” Moody’s analysts wrote. “Additionally, high and rapidly-growing fixed costs have pressured the budget and limited the state’s flexibility to make structural changes that would improve long-term budget balance. As a result, the state’s liquidity position has weakened to levels that provide minimal cushion against budget surprises.”

Democrats seized on the change to cast Christie’s fiscal stewardship into doubt.

“One would expect someone who has dug such a deep hole for himself to stop digging,” John Currie, who chairs the state’s Democratic Party, said in a statement. “Unfortunately, Chris Christie has not learned that lesson.”

The fiscal drama comes as Christie is fighting to restore his national image following the allegedly politically motivated closure of lanes to the George Washington Bridge by aides. The governor is also heavily traveling the country on behalf of other Republican governors and to boost his own political ambitions, most recently delivering a speech outlining some of his foreign policy principles on Sunday night. Christie used the 2011 agreement to burnish his credentials as a deal-maker capable of working across party lines, but a similar outcome on another agreement is far from guaranteed this time around. Meanwhile, Christie will have a hard time campaigning on a pension deal he was forced to scale back. 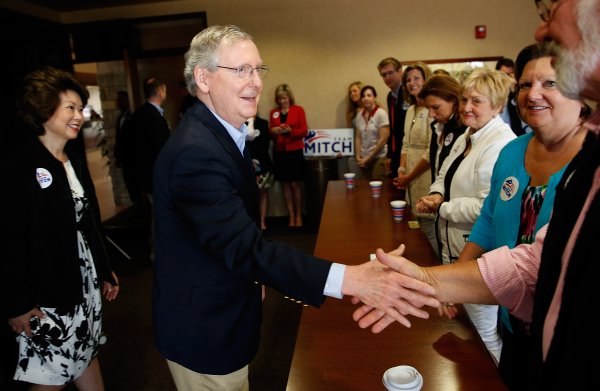