Two years ago, Abdel Moneim Aboul Fotouh, a medical doctor and moderate Islamist politician, was a serious contender for Egypt’s presidency. Today, as Egypt lurches toward its second presidential contest in as many years, and its first since the military overthrew elected president Mohamed Morsi last July, Aboul Fotouh has refused to run again.

“This isn’t a democratic election,” he told TIME last week. “It’s more like a referendum with two names, and one of the candidates represents state institutions and the military.”

That candidate is Abdul Fattah al-Sisi, the former commander of the armed forces who ousted and imprisoned Morsi, led a sweeping clampdown on Islamists under the guise of a “war against terrorism” and is now poised to prevail in the upcoming presidential election. “There’s no real competition because he’s had the support of the media since July 3,” Abul Fotouh said of the former military chief.

With a Sisi victory regarded as a near-certainty, the stage is set for an electoral anticlimax. Sisi’s only challenger, longtime Nasserist activist Hamdeen Sabahi, is polling in the single digits and struggling to overcome the cult of personality surrounding Sisi, who has positioned himself as the candidate of law and order and the man who rescued Egypt from the Muslim Brotherhood, a group that alienated much of the public while in power and has been demonized in the media since the military takeover.

The upcoming election also comes in the aftermath of the deadliest period of political violence in Egypt’s recent history. In the wake of Morsi’s ouster, the military-backed government has arrested as many as 21,000 people including dissidents and journalists, outlawed the Muslim Brotherhood, and killed more than 1,000 people during clashes with demonstrators. Islamist news organizations have been shut down, and a new law bans street demonstrations that take place without a government permit.

As a result, several distinct political blocs are refusing to participate in the election to protest the crackdown. The Muslim Brotherhood and supporters of deposed president Morsi, who at one time were the largest organized force in Egyptian politics, are boycotting the election outright on the pretense that the position of president is “not currently vacant.” Many ordinary Egyptians plan to sit out the poll out of exhaustion and disgust with politics after more than three years of upheaval — a sea change from the colorful, chaotic, and unpredictable presidential campaign of 2012, when Aboul Fotouh ran as an independent.

The 62-year-old was a longtime member of the Muslim Brotherhood, the same group to which Morsi belongs. A voice of political pluralism, he was expelled from the organization in 2011 over his bid for the presidency. His campaign promised reform and assembled a rainbow coalition of Islamists and secular activists. In the first round of voting, he came in fourth, but still garnered more than four million votes, or more than 17% of the total.

Despite spending most of his career in Islamist politics, Aboul Fotouh condemned Morsi’s polarizing style of politics as president, and backed the protests against him. But the former candidate rues what has happened since Morsi was deposed. “In this security atmosphere, this republic of fear, true political, democratic hope isn’t possible,” he said. “This repression has to stop, this use of the security apparatus to oppress people, or else there will be another revolutionary explosion, dangerous for the country.”

Numerous activists, veterans of the protests against both Mubarak and Morsi, also regard the election as a pageant. Ali Hassan Ali, 51, campaigned after Mubarak’s departure to try and convict police and security officials responsible for the deaths of protesters. Today he is part of a group of activists urging what he calls a “positive boycott.” The idea is for people to show up at the polls, but write on their ballots that they reject the premise of the current election. “The goal of the boycott is to continue the revolution,” said Ali. “There is a large group of revolutionaries who reject this electoral process, because it is at its core the result of a military coup.”

The April Sixth Youth Movement, a group that was instrumental in helping to launch the protests against Mubarak, has also called for an election boycott weeks after the group’s activities were banned by a court order. “It became clear that this is theater and that Sabahi is joining just to make Sisi’s propaganda look good,” said Ramy El Swissy, co-founder of the movement and member of its political office, speaking in a separate interview. “There’s no such thing as a free election after a coup.”

Sabahi has not let such doubts dampen his candidacy, embarking on an upbeat multi-city campaign swing on May 16, through Nile Delta en route to Alexandria. His aides insist that the campaign is serious, noting that Sabahi came from behind in 2012 to finish third behind Morsi and Mubarak’s last Prime Minister Ahmed Shafiq. “We’re sure that Sabahi can win this election,” said Emad Atef, a member of Sabahi’s campaign committee.

But even Atef acknowledged the problem of voter fatigue. Since 2011, Egyptians have voted in three constitutional referendums, three phases of parliamentary voting, and a presidential election. “They’re tired of politics,” he said. “The political process hasn’t made any kind of real change in the last three years.”

That may be why many Egyptians, yearning for stability and hoping for an economic and social recovery, welcome the firm leadership that Sisi represents. “Sisi is a strong man. He has a military background. He knows there is terrorism in the country, that the entire Brotherhood is a terrorist organization. They killed people, police, and soldiers,” said Zeinab Abdel Halim, a grocer on a leafy corner in a middle class section of the Cairo neighborhood of Mohandiseen.

But millions of others remain disaffected. “If someone speaks against Sisi, they’re terrified. Everyone’s scared,” said Abdallah Mohamed Said, a taxi driver from the working class district of Shubra. “I’m not voting. There’s no point. Egypt is finished.”

The aura of inevitability gathering around Sisi has both drained the suspense from the current election cycle and moved the argument ahead to how Sisi will tackle Egypt’s stagnant economy, creaking infrastructure, and persistent Sinai-based armed insurgency, and whether the political crackdown will continue. The winner of the election “will be the president,” said Aboul Fotouh, sitting in his New Cairo office. “Their authority will be a reality,” he said, “de facto.” 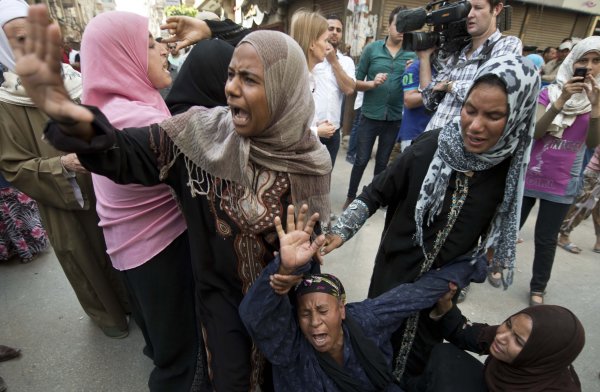