Getting Past the Great Ideological Divide in Business Today

In 1946, as unionized workers in America’s steel mills, coalfields, rail yards, auto plants and electrical equipment factories crippled the economy by launching a wave of strikes, Peter Drucker urged the two sides in the great struggle to find some way to get past their deep differences.

“What we need is not an ideology,” he wrote, “but a science—a new science of industrial peace.”

The same might well be said of the defining divide in today’s business world: those who hold that “maximizing shareholder value” is a corporation’s primary mission versus those who believe that companies have an obligation to provide benefit to a multitude of stakeholders.

That this is a clash being waged by individuals who cling to their own dogma and tend to talk right past one another is underscored by a study being released today from the Aspen Institute’s Business and Society Program.

To better understand this dynamic—as well as its myriad nuances, which suggest where common ground may lie—Aspen commissioned the Keller Fay Group, a marketing research firm, to conduct 28 one-hour interviews with corporate executives, investors and scholars about the purpose of the corporation. The study doesn’t identify who said what, but it does list the participants, which included folks from PepsiCo, Kroger, Eli Lilly, the Ontario Teachers’ Pension Plan, BlackRock, Generation Investment Management, Northwestern University, MIT and Harvard.

Many of the views expressed were stark. “Societies that don’t have shareholder value as a goal never succeed,” said one of the interviewees, who added that “the old Soviet Union . . . was the ultimate stakeholder society.” From the other end of the spectrum came this: “Corporations serve society rather than the other way around. . . . To the extent there’s a single mission, it would be a social one. But really, when you unpack that a little bit, you’re talking about a lot of different missions that affect the wellbeing of a range of stakeholders.”

Interestingly, Drucker had problems with each of these positions, at least in their most extreme forms. It was in the 1950s, he noted, that General Electric CEO Ralph Cordiner and some of his peers began to preach “that senior executives were responsible for managing the enterprise ‘in the best-balanced interest of shareholders, customers, employees, suppliers, and plant community cities.’ That is, what we now call stakeholders.”

The trouble was that “Cordiner’s generation and its executive successors did not define what performance and results produce the best balance, nor did they develop any kind of accountability,” Drucker explained. At the same time, he wrote, “boards of directors . . . became increasingly impotent and increasingly rubber stamps for a company’s top management.” And any organization is bound to deteriorate “into mediocrity and malperformance if it is not clearly accountable for results and not clearly accountable to someone.”

By the mid-1970s, this failure had spurred the rise of a new philosophy: putting shareholders first. “It sounds much less noble than Cordiner’s assertion of the ‘best-balanced interest,’ but it also sounds much more realistic,” Drucker observed in a 1991 essay for Harvard Business Review. Yet this, too, had a fatal flaw: “For most people,” Drucker pointed out, “‘maximizing shareholder value’ means a higher share price within six months or a year—certainly not much longer.”

As I’ve written, this has led to all kinds of misguided corporate decisions that, while enabling executive pay to bloat, have done serious damage to both company and society in the long run.

This would be utterly depressing, except that the Aspen study also contains some glimmers of promise. Notably, more than half of the respondents either strongly or somewhat strongly agreed that the primary purpose of the corporation is to serve customers’ interests—an idea that has been advanced by the University of Toronto’s Roger Martin as ultimately the best means to please shareholders themselves.

“To create shareholder value,” Martin has written, “you should instead aim to maximize customer satisfaction. In other words—and nobody should be surprised by this—Peter Drucker had it right when he said that the primary purpose of a business is to acquire and keep customers.”

Beyond that, according to Aspen, greater accountability for corporate management was “a central concern” among those interviewed, while “long-term value creation appears to be a unifying goal.” Indeed, as Keller Fay put it, “this may be the most surprising—and gratifying—outcome of the study: Some of the most vehement criticisms of short-term decision making emanated from the enthusiastic shareholder-value advocates.”

Can we really shift to a customer-oriented, long-term-focused business culture undergirded by adequate accountability? Not easily. But launching an in-depth dialogue on the topic, as Aspen has done, is an important step toward the way that Drucker wanted companies to behave: “Unlike Cordiner, they do not ‘balance’ anything,” he wrote. “They maximize.” But they do not attempt to maximize shareholder value. Instead, “they maximize the wealth-producing capacity of the enterprise.”

“It is this objective,” Drucker concluded, “that integrates short-term and long-term results and that ties the operational dimensions of business performance—market standing, innovation, productivity and people and their development—with financial needs and financial results.”

All of which seems a lot more like science than ideology to me.

****
A final word: “Everything human beings do,” Drucker wrote, “obsoletes sooner or later.” It is with this in mind, and with bittersweet feelings, that this marks my last “Drucker Difference” column. After more than six and a half years of tying Peter Drucker’s timeless insights to current events—first at BusinessWeek, then at Forbes and now at Time—the moment has come to turn my attention to other priorities and other writing. But don’t be fooled: This shouldn’t be read as a sign that Drucker’s wisdom is no longer relevant. Quite the contrary. So, please, take part in the continuing conversation @DruckerInst. I look forward to seeing you there. 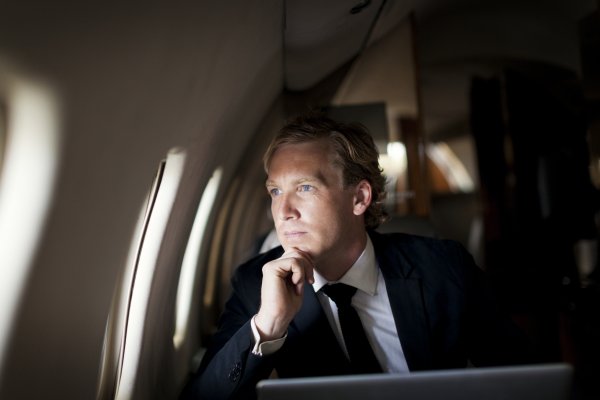 This Is What Makes Most Executives Want to Cry
Next Up: Editor's Pick