The Bachelorette and the Death of Eric Hill

On April 23, Eric Hill died from injuries incurred in a paragliding accident. The 31-year old explorer sought to visit every country in the world, and was documenting his trip, which he dubbed “The Global Odyssey,” on Instagram while collecting footage for a documentary. He was active, energetic and vibrant. He was also a contestant on an upcoming season of The Bachelorette.

While Hill was already off the show when his tragic death occurred — having been sent packing by current Bachelorette Andi Dorfman — his passing put the producers of the ABC reality show in an awkward position. Would they scrap the series? Would they edit him out of the entire show and pretend he had never existed in the show’s strange demi-reality? Would they leave him in situ, knowing that a sad end was in sight for the young man?

Back in April, while Hill was still in a coma, the show’s host Chris Harrison stopped by ABC’s The View to promote the show and host Barbara Walters asked him the question that was on everyone’s mind: “That is a tragedy,” she said. “But how are you going to edit this?”

“The show? I don’t know,” Harrison told her. “We haven’t gotten there yet.”

On May 19, during the show’s premiere, they got there. Harrison opened the show by tackling the issue head on: “Throughout the years, many hundreds of men and women have come on this show in search of love,” he said. “And they’ve all become a part of what we consider The Bachelor family. At this time we’d like to take a moment to honor one of these men — our friend Eric Hill.” A poignant montage of Hill’s travels and somber music played. Harrison dedicated the season to Hill’s memory. Then, he immediately launched into Andi Dorfman’s journey to find love and a fairytale ending. It was an awkward transition from the loss of life to looking for love, but is there anything the show could have done to navigate this impossible situation more deftly?

As Harrison explained in his Entertainment Weekly blog:

It’s rare for reality to strike so close to reality television, but this isn’t the first time that tragedy has affected these shows. “It’s the first time in the 12 years we’ve been doing the show where we’ve had this sort of situation,” Harrison wrote, but there have been others: The Bachelor contestant Gia Allemand took her own life months after she had been a contestant on the show; the producers opted for a brief mention of the loss. The Deadliest Catch lost one of their stalwart sea captains, Phil Harris, mid-season when he passed away from a massive stroke. The death was featured on the show and Discovery aired a special tribute episode to the crab fisherman.

But viewers knew Phil Harris after seasons of watching him haul crab with his sons, whereas The Bachelorette is in the strange predicament of having to introduce viewers to someone who is already gone. It’s a thorny situation that requires cautious navigation, which the show handled well enough — particularly for a show that normally pounces on human vulnerability and throws it into a hot tub with a bottle of champagne while an eager cameraman films it all.

While the producers and ABC chose to leave Hill in the show (and to edit him out would have been equally strange), Hill’s presence on The Bachelorette is tricky. It was chilling that Harrison dedicated the season to Hill and a few minutes later, we saw him step out of a limo with a giant, hopeful grin on his face. Watching him introduce himself to Dorfman, cuddle with her by a fire and talk about his love of adventures and sky diving and base jumping is heartrending. Seeing Hill on camera reminds viewers of his (and their) mortality — it’s not escapist, like most reality TV, and it doesn’t make for light viewing. It’s not clear how far Hill gets in the process, but some reality gossip sites have claimed that he’s among the final four contestants vying for Andi’s heart, and producers have confirmed that he leaves the show before the finale. That’s a lot of searing screen time and if it’s tough to watch as a stranger, it’s impossible to imagine how painful this is for his friends and family.

Mostly, Hill’s presence on the show is a glitch in the matrix of reality television. While people know that the show is pre-recorded, in many ways the audience is made to feel that we are chaperoning Andi’s dates in real time, that our shouts at the television will steer her away from the overly-pomaded dude who’s “not in it for the right reasons.” The passing of Hill reveals the reality of the show that exists behind the curtain of so-called “reality” television. Like any reality, it’s hard to navigate.

MORE: Dating Lessons I Learned From The Bachelorette Season Premiere 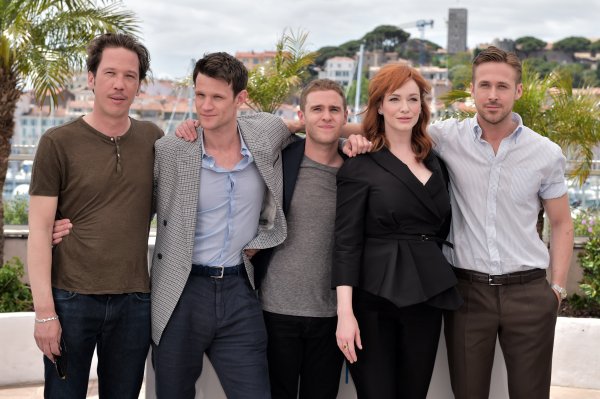 Ryan Gosling's 'Lost River': Crazy Like a Rat
Next Up: Editor's Pick