RECAP: Dancing with the Stars Watch: Finally, The Finale

Welcome to the Dancing with the Stars Thunderdome, where four couples go in, and one comes out with a Mirror Ball Trophy to place on their mantel and make Santa Claus jealous.

For tonight’s finale, the stars will slap on their spray tans, sequins and spandex for two routines. First will be an assigned dance from the Switch Up Week, followed by their freestyle routines, which are, of course, everyone’s favorite, because they show the true power of Dancing! (“Dancing” must be said in the Jon Lovitz voice). One contestant will leave at the end of tonight’s show, based on last week’s votes, while the remaining three compete for the title, the victory and, of course, the Mirror Ball Trophy.

James Maslow and Peta Murgatroyd: James and Peta lucked out with getting to dance a sultry tango for the final dance, because it let them play up their fake dating for maximum vote-getting. In rehearsal footage they say they are going “to go for it,” as opposed to all the other teams. Len declared it “tighter than a trumpeter’s tweets” which probably isn’t as tight as a dancer’s you-know-what. Speaking of which, Carrie Ann Inaba dedicated much of her critique to the placement of James’ you-know-what, and then made a crass joke that no one could stop because live television is the best kind of television. 29/30

Meryl Davis and Maksim Chmerkovskiy: Olympic ice dancer Meryl already has a gold medal, so she wants to win this competition for Maks’ sake. Their complex, dramatic and beautiful Argentine tango should do it, but who knows anymore, because even though it was practically perfect, as her dearly departed ice dancing partner Charlie White can attest, DWTS isn’t exclusively a talent competition. The judges doled out a perfect 30/30.

Candace Cameron Bure and Mark Ballas: Candace can’t believe she’s in the finals, and neither can Charlie White. (JK?) Mark was injured during rehearsal, and even though he showed up on set in a sling, he had a miraculous recovery that will miraculously translate into votes. Their quickstep was solid, if unimpressive, due in part to the fact that they were in the unenviable position of following Maks and Meryl’s stunning routine. 27/30.

Amy Purdy and Derek Hough: Mark doesn’t get to hog all they sympathy votes this week, though, because Paralympian Amy Purdy is also suffering, albeit minus the vote-inducing ambulance ride. Her back is spasms have returned, undoubtedly due to the fact that she is dancing without feet. She powers through the tears running down her face and delivered a solid salsa routine. 30/30

James and Peta, Freestyle: After a tear-jerking story about how his brother’s coma taught him to follow his dreams, James and Peta hit the dance floor for their freestyle. They came up with a Road Warrior meets Step Up 2 The Streets freestyle mash-up that some how worked. (If Hollywood wants to option that idea, I am open to negotiations.) The routine included a backflip, martial arts moves and a big old sword. 29/30

Meryl and Maks, Freestyle: In a video montage, Meryl’s ice skating friends all came out to support her and explain how happy they are to see her open up emotionally on the dance floor. Then Meryl and Maks came out and left it all in the ballroom in a steaming, passionate, stunning routine that left Carrie Ann bawling her eyes out at the judges’ table. In the words of Joey Lawrence, whoa. She wiped her tears away and demanded that they get married, right then and there. Bruno says it was the perfect example of a work of art. Len (Len!) wished he could turn it up to 11. 30/30.

Candace and Mark, Freestyle: In her pre-dance montage, Candace hit the double whammy of ’90s nostalgia and tear-inducing story about being the slightly (as in, not really at all) chubby teen on a national television show. (Also, Lori Loughlin might be a witch, because she looks exactly the same.) Their freestyle starts off with Candace as D.J. Tanner, who is an actual deejay, in a gold lamé jumpsuit. She and Mark then hit the dance floor to “Canned Heat” for a funky number that didn’t quite connect with the Full House star or the judges. 24/30

Amy and Derek, Freestyle: Amy’s pre-dance montage tells the tragic tale of Amy coming down with bacterial meningitis and having her legs amputated. It also tells the triumphant story of a young woman overcoming adversity to snowboard in the Paralympics and dance each week on national television without feet. Her freestyle involved lots of lifts, flowing moves and ended with an aerial rope act that would make Pink jealous. Len loved the routine, but didn’t think the “rope bit” was necessary. Carrie Ann felt that Amy was “dancing with her soul,” which sounds uncomfortable 29/30

The Leaderboard: Meryl and Maks are in the lead, with Candace and Mark holding down the rear.

Who Goes Home And Who Goes To The Final Finals: Pay attention demographers: apparently DWTS voters are bigger fans of Growing Pains than Big Time Rush. James Maslow was sent home before the finals of the finals.

Best Reason To Come Back Tomorrow: We crown a winner, but give them a Mirror Ball on a stick instead of a crown. 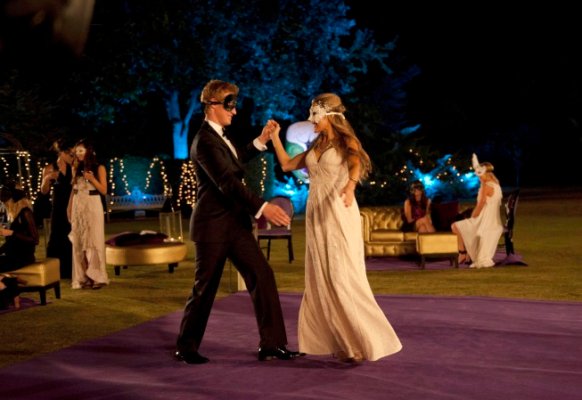 REVIEW: I Wanna Marry "Harry": Welcome to Bucking-sham Palace
Next Up: Editor's Pick