Ukraine's New Leaders Struggle to Govern Under the Gun

On Thursday morning, when Ukraine’s new parliament met to confirm a new government – or, as the chamber’s speaker put it, “to move ahead with a total renewal of power” – a detachment of revolutionary troops was parked right outside in an armored personnel carrier. They were not there to protect the lawmakers. They were there to warn them. “So they don’t forget who’s in charge,” said one of troops, Evgeny Sikanov, who had an axe tucked into his bullet proof vest and a portrait of Jesus painted on the front of his helmet. “If they even think about betraying the will of the people, I’m the guy who’s going to go in there and give them a spanking.”

In the past few days, threats liked that have turned the task of governing into a tightrope walk for the political leaders of the revolution in Ukraine. One week after they toppled the regime of President Viktor Yanukovych, they have begun trying to fill the power vacuum he left behind. But they are being forced to do that at gunpoint, threatened from all sides with a resumption of the uprising – this time against the revolutionary leaders themselves.

In the region of Crimea on Thursday morning, an armed militia showed how easily that could happen. Calling themselves defenders of the ethnic Russian majority in the Crimea, they stormed the regional parliament and the headquarters of the local government, which had gone over to the side of the revolution the previous day. The gunmen proceeded to call a quorum of the region’s pro-Russian lawmakers, who convened a session of the Crimean parliament. Standing in the wings with assault rifles and rocket propelled grenades, the masked men then watched as the chamber granted their demand: allow a referendum on the secession of Crimea from Ukraine. A large demonstration of ethnic Russians gathered outside the building to cheer the gunmen on, waving the Russian tricolor.

The pressure on the national parliament in Kiev, meanwhile, was not much less intense. Before voting in a new government, the leaders of the revolution needed to get the approval of the Maidan – the revolutionary encampment in the center of the capital. They had worked through the night to prepare their list of candidates, trying to divvy up the ministerial posts among the disparate political parties, activist groups and paramilitary organizations involved in chasing out the old regime. “No one slept,” says Zoryan Shkiryak, a political activist who was tapped to become Ukraine’s immigration czar. “We came up with the list. But the hard part is getting the Maidan to go along with it.”

That proved nearly impossible on Wednesday night. Still packed with thousands of hardened revolutionaries with no intention of leaving the square, the Maidan has become the noose around the necks of Ukraine’s new leaders. When those leaders came to the square to present their list of candidates, the Maidan shouted them down with chants of “Shame!” The list included many experienced politicians, whom the crowd seemed to feel were tainted with the endemic corruption of Ukrainian politics. At one point they began to chant, “Give power to the young!” Militant leaders of the revolution then got up on the stage to denounce the older politicians for selling out the uprising. “This is a clown show!” said Vladimir Parasyuk, the leader of one of the Maidan’s armed “self-defense” battalions, who took the microphone wearing fatigues. “All of these politicians need to remember that you serve the people,” he said. “And if you forget that, we will come and take you away.”

Hanging heaviest of all over the political leaders of the uprising has been the grief of the revolutionary crowds, who are still mourning the deaths of nearly a hundred of their fallen comrades. Police gunned down dozens of them during the last stand of the Yanukovych regime last week, and on Thursday, when the revolutionary leaders convened parliament, the widows and mothers of the dead marched into the chamber weeping and carrying their memorial photographs, each set in a frame decorated with a crown of thorns. The pictures were placed in a row inside the parliament building, a grim reminder of the price the Maidan paid to put the revolutionary lawmakers in power.

“The people want to see blood for blood,” one of the parliamentarians, Hrihory Nemiriya, told TIME after the chamber adjourned. “The temperature in society is still very high.” In the course of an hour, parliament managed to vote in a new Prime Minister and most of his cabinet. But the fact that roughly 70% of the posts were filled with people from the western regions of Ukraine further alienated the eastern and southern parts of the country, which have resisted the revolution.

Nowhere was that more clear than in the southern region of Crimea, a bastion of Russian nationalism that houses a major Russian military base. By Thursday night, the Crimean capital of Simferopol seemed to have slipped from the revolutionary government’s control. About a hundred policemen from the Interior Ministry of the old regime were guarding the regional parliament building, with dozens of pro-Russian gunmen still barricaded inside, preparing for another session of the Crimean parliament due to commence at gunpoint on Friday. On the lawn outside the building, a large sign written in red letters said, “Crimea is Russia.” So far, the new government in Kiev has come up with no clear solution for stopping the wave of separatism sweeping the Crimean Peninsula in the south. They clearly have enough problems trying keep control of the capital, where a revival of the revolution seems to be one unpopular decision away. 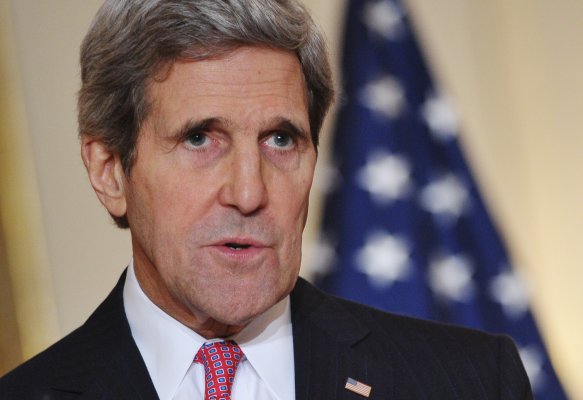 Russia Scrambles Jets Near Ukraine, But Kerry Says Calm Will Prevail
Next Up: Editor's Pick